This is NOT an attack on Phil Mickelson! I’ve already done that, been there (see Phil Mickelson “Opens Up” to Arthritis Today Magazine and Is Phil Mickelson Shilling for Enbrel?). So, relax and proceed to the back nine! This is about the “non-branded” disease awareness campaign just announced by Pfizer & Amgen, the companies that bring you ENBREL.

The centerpiece of the campaign is the “On Course with Phil” website, which is pretty lame by today’s social media standards. Before I get to that, let me show you the homepage screen that I just captured: 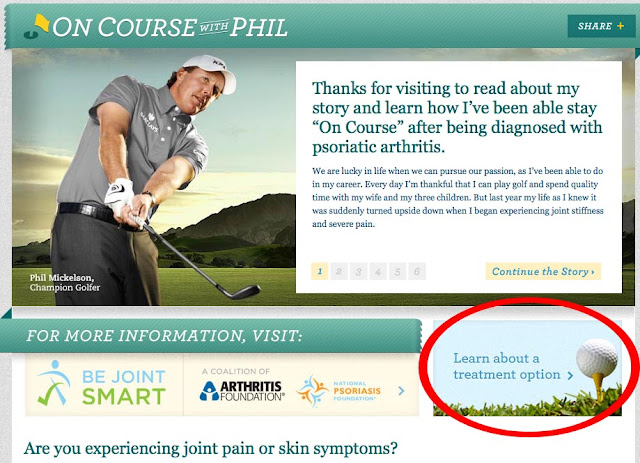 In case you missed it, I circled the “money shot,” which is not Phil hitting the ball in the hole, but the prominent link to a “treatment option.” The link, of course, leads directly to the branded ENBREL website. Surely, this biologic compound that has a LONG list of things you need to tell your doctor about before taking (eg, “if you live or have lived in …the Southwest”) is NOT the first treatment option one should consider!

Amgen and Pfizer have teamed up (ie, given money to) the Arthritis Foundation and the National Psoriasis Foundation — patient groups — to form the “Joint Smart Coalition,” which is responsible for the “On Course with Phil” campaign.

On the “On Course with Phil” website, Phil says that he first experienced pain right after the 2010 U.S. Open, which was held in Pebble Beach, California — the same “Southwest” that the ENBREL package insert says you should tell your doctor about if you ever lived there.

Anyhoo, the website is pretty primitive. I was hoping to see at least a video clip of Phil shooting some balls or maybe even telling us personally about his experience. Instead, you have to click “1”, “2”, etc. to read what he has to say. Very BORING!

And that “SHARE” button in the upper right corner — it’s not what you think. All it is is a form whereby you can send an email to one other person. Where’s the social media share button that allows you to share this site on Twitter, Facebook, etc? I can get code for that and not even pay a dime for it! Like this one:

Pfizer is often touted to be a leader in social media. But if Pfizer built this site, then it’s not worthy of wearing that mantle. I think, however, the real reason this site is basic Web 1.0 is that AMGEN and PFIZER spent all their money on signing up Mickelson and they have none left over to do anything fancy like video or social media integration (see Amgen Blows Its Marketing Budget on Phil Mickelson Campaign).

I’ve often said that celebrities and social media is a “match made in heaven” for product promotion and that the drug industry is likely to use this combination more often (see “Use of Celebrities for PR and DTC Advertising“; use discount code: 71-01PMYFREE). So, it’s a surprise to me that Pfizer and Amgen have not (yet) taken advantage of the synergies between celebrities and social media as other drug companies have done (see, for example, Danica Patrick: NASCAR Driver, Super Model, Superbowl Lingerie Ad Model, & COPD Spokesperson All Rolled Into one!). But, hey, it could still happen!

Merck in the Mirror: Profits, Not People, Come First. Shame!