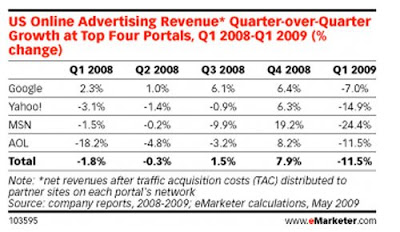 “US Advertising Continues to Imitate a Stone,” says eMarketer. It was reporting on TNS data for measured media ad spending, which showed an overage decline of 9.2% for the fourth quarter of 2008 vs. the same quarter of 2007. BUT… “One bright spot in the TNS report was Internet advertising, which grew by 4.6% in 2008, but even that news was dimmed: That was the weakest full-year growth for online advertising since the dot-com bust of 2002.” 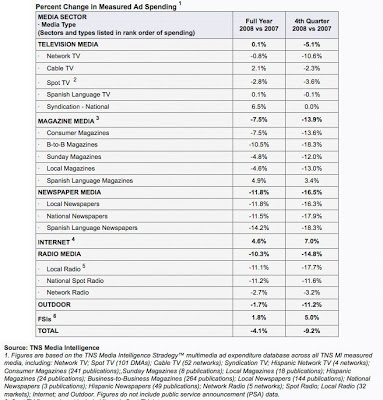 Click for an enlarged view.
Meanwhile, search ad revenue, the bellwether of online advertising, decreased 11.5% in the first quarter of 2009 compared to the fourth quarter of 2008. And if not for Google, every quarter of 2008 would also have shown Q over Q decreases for this sector (see chart below).

“One takeaway from Google’s strength relative to the other three portals is the strength of search ad spending relative to display spending,” said David Hallerman, eMarketer senior analyst. “Even though Yahoo!, MSN and AOL all get some portion of their revenues from search, the weakness of the display market will continue to drag down total US ad spending results.”

Although there are some articles claim that pharma DTC ad money may be flowing into online social media (see Big Pharma Finally Taking Big Steps to Reach Patients With Digital Media“), based on the above data, I doubt that 2009 will see an overall increase in pharma ad spending online.

Meanwhile, 58% of respondents to the he Future of Rx DTC Advertising predict that overall DTC spending will decrease 2% or more in 2009 compared to 2008. What do you think? Take the survey here, learn more about it here.