Two of the biggest, if not THE biggest, US-based pharmaceutical companies — Pfizer and Merck –have made separate announcements in preparation for Wall Street analyst pow wows this week.

Pfizer announced a cut of 20% of its US sales force while Merck announced it plans to cut back on TV ads.

Pfizer Inc. signaled the end of an era in the drug industry by announcing plans to slash its domestic sales force by 20%, or more than 2,000 people. The deep cut by Pfizer, which has fielded the largest sales army for years, could lead to a broader retrenchment across the industry. Lehman Brothers drug analyst Tony Butler said in a research note yesterday that the layoffs could shave $440 million from Pfizer’s annual expenses. For years, Pfizer has fielded the biggest sales force in the industry, about 11,000 people, including management. The company also has been among the most aggressive in sending multiple salesmen to call on the same doctor as a way to boost sales. Until recently, adding more sales reps translated into greater drug revenue. But Pfizer, and the industry, have faced a backlash from doctors as the number of representatives — about 100,000 industrywide at its peak — reached the saturation point. (WSJ: “Pfizer to Cut 20% of U.S. Sales Force, Signaling End of Era“)

Merck plans to cut back on television advertising of new drugs in favour of more targeted media such as online internet communities, as part of the US drugmaker’s revamp of sales and marketing. The leader of Merck’s ambitious overhaul of its sales and marketing effort is testing “numerous pilot programmes” with new drugs such as Januvia, for diabetes, and Gardasil, a cervical cancer vaccine, to explore different ways of spending drug marketing budgets. Peter Loescher, Merck’s new second in command who is leading this drive, said in his first interview that changes in viewer habits as well more cost-effective use of resources could change drug marketing.
“The new model will also move away from a broad broadcast DTC approach in its classical sense. It has to. Because as a consumer we’re sitting in front of our TV, and we’re switching all the time,” he told the FT. — FT

What do these two announcements have in common?

Out with the Bad
Both could be seminal events, signaling “Out with the bad.” Excessive sales forces and excessive reliance on TV broadcast DTC advertising are currently experiencing diminishing returns as doctors push back sales reps and consumers switch off their TVs in favor of more interactive media.

Here’s Google’s way of looking at the disparity of media ad spend vs. consumer viewing habits: 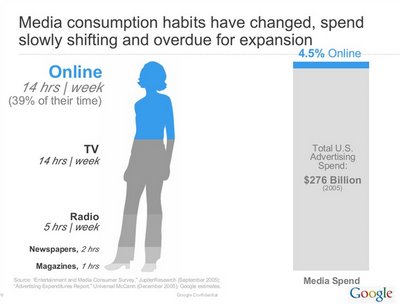 So, it’s about time that more attention be paid to the Internet in terms of reaching doctors and consumers where they are spending more time and saving bucks!

Drug companies lag other industries in online marketing: According TNS, Merck in 2005 spent $7.5 million on Internet advertising (not including search) vs. $769 million total; that’s about 1% of the total budget.

Of course, these two changes — if and when they come to pass — may not amount to more than a hill of beans if other drug companies don’t follow these leaders.

Merck May Know How to “Engage,” But It Certainly Does NOT...