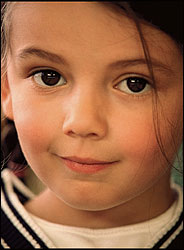 Aw! How cute and cuddly!

The veracity of this slogan might be on a par with other infamous slogans such as “War is Peace” or “Work Makes You Free.”

I say this because not so long ago, when Merck was trying its best to hide evidence that Vioxx could cause serious heart problems, it seemed that patients came last at Merck (see Corporate “Moral Values” Anyone?).

A Congressional committee exposed some damning evidence that Merck had a specific program to train its sales reps on techniques for avoiding cardiovascular questions from docs and presenting them with alternative data (see “Is Pharmaceutical Marketing BS?” and “Get a Load of Those Gams!“).

What has changed since then?

Merck did get a new CEO, despite the fact that several candidates considered for the position would rather climb mountains (see “John Mack Rebuffs Merck’s CEO Offer“). Could that be it?

Nah! CEOs never know the details — the better to avoid responsibility (see “Who Should Pay for Merck’s Obstructionism?“).

Let Employees Speak!
The vast majority of employees and managers at Merck are probably very dedicated people who actually believe in and live by the slogan “Patients come first.” Perhaps Merck’s corporate communications department and Ogilvy & Mather Worldwide, the agency that created the campaign, are expressing the views of these employees, but I think Merck should let their employees speak for themselves.

Here’s what I propose. Instead of a fancy expensive ad campaign with images of “children and puppies”, why don’t they just interview a few employees and let us hear how they feel? How they want to get back to the Merck they knew when they first came on board. Where they hope Merck will go in the future.

Better yet — Merck should start a blog and have employees contribute. That might be better than spying on patient blogs, which I hear a few drug companies are doing (see “Drug Companies to Hire consultancy to spy on blogs“).

Whether or not Merck will do any such thing, they should hold off on the doublespeak and ad agency dribble until their actions have again proven that patients come first at Merck.