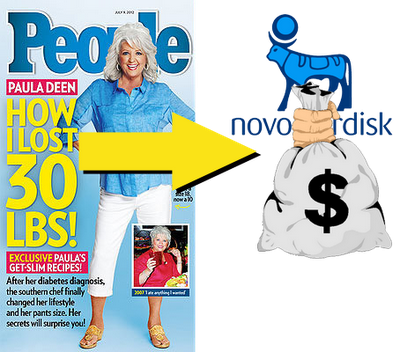 Last month it was reported that celebrity chef and paid spokesperson for Novo Nordisk had lost 30 pounds in the six months since she signed on to help promote Novo’s diabetes drug, Victoza (see “Paula Deen Loses 30 lbs. Urges Twitter Fans to Pig Out on Fourth of July!“). This was good for Deen and redemption for Novo Nordisk, which was criticized by me and others for choosing Deen — who is notorious for her high fat, high calories recipes — as a type 2 diabetes spokesperson (see see, for example, “Paula Deen & Victoza: Brilliant or Dumb?“).

So how did Deen lose all that weight? On the ABC food show “The Chew” Deen said: “It’s really about moderation. I’ve said it for so long but I really started to practice that.” She also started working out with weights and walking.

Well, I doubt “so long” goes back to before she started collecting money from Novo Nordisk in December, 2011, or thereabouts. I also don’t put any stock into her statement: “It took me a couple of years to get to this point” (see “What’s the Secret to Paula Deen’s Weight Loss?“). The fact is, she lost the weight AFTER being signed on as a spokesperson.

Which proves that money is the best incentive for adhering to a healthy lifestyle. If, like Deen, I was paid a substantial amount of money to lose 30 lbs in six months, I have no doubt I could do it. In fact, I have lost 30 pounds in less than 6 months without any monetary rewards. But that’s another story; ie, I have since gained back those 30 lbs :-(.

Even rewards as low as $1 or $2 per week can induce ordinary folks like you and me to lose weight. This was demonstrated by a UConn study in which patients who lost “at least a pound in a given week would draw from a prize bowl. The prize bowl contained 500 cards, 250 of which were prizes. Most of the prizes were valued at around $1, and some were of greater value, offering a chance at larger prizes such as an iPod or fitness equipment. The average cost per draw was approximately $2” (see “UConn Researchers Find Incentives Effective for Weight Loss“). Participants in the study also received “supportive counseling,” which, I’m sure, Deen also is getting (free of charge?).

Let’s do some math. A 6% weight loss for the reward group computes to about 11 lbs for an overweight 180-lb woman. That’s over a period of 3 months. In six months, it would be 22 lbs — pretty close to what Deen lost.

In the UConn study, participants were not guaranteed a reward if they lost weight and the reward was not commensurate with the amount of weight lost — such a reward system might be unethical and cause people to starve themselves for money. Hopefully, that will not happen with Paula Deen. And hopefully, she, like me, will not gain back her weight when her deal with Novo Nordisk is finished.

My little poll (below) suggests that a plurality (not a majority) of people believe the Novo Nordisk deal with Paula Deen was a “Dumb” idea from a marketing perspective. Many people who were unsure may now think it wasn’t such a dumb idea after all. What do you think?