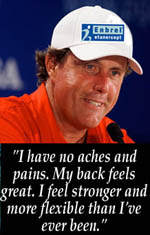 Today, while reading an article about 5 Guys Burgers (“All in the Family”) in the August 2012 issue of Forbes Magazine, I came across a reference to Phil Mickelson. In 2010, Mickelson gave a glowing, unprompted endorsement of Five Guys Burgers during a press conference at The Players Championship.

“What I’ve done the last five days, go to Five Guys Burgers. That place is so good. I can’t stop going there. This will be my sixth day in a row. I grew up on In-n-Out. I thought that was the best burger until I had Five Guys. That is hands down the best burger I’ve ever had” (see story here).

[Keep in mind that Cink may shill for In-N-Out – his Twitter profile shows him eating an In-N-Out burger and fires.]

Cink was correct – Mickelson was biased. As reported on CNBC, Gaylord Sports Management, which represents Mickelson, confirmed that Mickelson was in fact part of a group that has purchased the rights for Five Guys franchises in Orange County.

A few months later, during the 2010 PGA Championship, Mickelson again made an “unsolicited” endorsement. This time, it was for ENBREL, the Amgen/Pfizer drug inicated for the treatment of psoriatic arthritis.

The subtitle to a NowPublic article titled “Phil Mickelson Arthritis: Will Play At PGA Whistling Straights”, stated “Phil Mickelson Has Psoriatic Arthritis – Uses Enbrel To Help Manage Condition.” The article (here) includes this quote from Mickelson: “I have no aches and pains. My back feels great. I feel stronger and more flexible than I’ve ever been.”

At the time, I asked “Is Phil Mickelson Shilling for Enbrel?”

Well, the jury is out on whether or not Mickelson was a paid ENBREL celebrity endorser at the time he made that statement. But in a manner similar to his Five Guys Burgers outing by social media, it was later revealed that Mickelson was indeed a paid celebrity spokesperson for ENBREL (see “Phil Mickelson ‘Opens Up’ to Arthritis Today Magazine“). The Arthritis Today article claims that Mickelson “entered into a partnership with Amgen-Pfizer, an Arthritis Foundation sponsor, in November, 2010.” Also see “Amgen Blows Its Marketing Budget on Phil Mickelson Campaign” for the Amgen press release announcing the deal.

As soon as Phil became a PAID spokesperson for ENBREL, he could not say these things because he became an extension of the brand and subject to FDA regulations. But at the time he said the above, I suspect he was giving his future benefactors a freebie! We don’t know how long the negotiations were going on before the deal was signed, but this story could have been arranged to seal the deal.

BTW, my sons think Five Guys Burgers are “epic.” They ate at a Five Guys joint every week while at Penn State. Of course, they are not paid by Five Guys nor do they own a Five Guys franchise.

So, I’m not saying that Mickelson lied when he said a Five Guys burger was “the best burger I’ve ever had” nor when he said he feels “stronger and more flexible than I’ve ever been” after taking ENBREL.

My concern is a celebrity who promotes a drug having dangerous side effects without revealing that he may have a financial interest in the product. When Mickelson first made his statements about ENBREL he may or may not have technically signed a contract, but it was obviously meant to get the work — a demonstration of what he could do. Now that he is featured on ENBREL TV ads, everyone knows he is a paid spokesperson. I have no problem with that, especially that now his commercial speech is regulated by the FDA and he can no longer make outlandish statements.

UPDATE (8/16/2012): In a personal communication, a reader said: “I had to laugh when several times I thought I noticed Phil dropping a right hand wedge into his bag during the TV commercial. But look closely, it’s true…” Phil is left-handed, so I guess the director of the commercial used his own clubs as props!