Last November, I posted information about AstraZeneca’s proposal that the FDA review ALL DTC (direct-to-consumer) ads prior to running them (see “AstraZeneca’s Risky Proposition“).

AZ called for “a mandatory requirement for pharmaceutical companies to submit all direct-to-consumer (DTC) advertising to the U.S. Food and Drug Administration’s (FDA) Division of Drug Marketing and Communication (DDMAC) for review prior to its use.”

At the time, many people thought the proposal was a red herring because FDA did not have the resources to do the job. Also, some experts felt that Congress would take the bluff and provide the necessary funding as well as laying out the rules for FDA (pre)viewing.

However, it appears that the industry may be executing an end-run around Congress by negotiating directly with the FDA to provide the necessary funding to hire new people to (pre)view ads.

According to an article in today’s Wall Street Journal (“Drug Firms Use Financial Clout To Push Industry Agenda at FDA“), the industry is currently bargaining with the FDA and dangling increased “user fees” in front of the regulators to entice them to adopt its proposal for DTC (pre)view.

“In the latest talks with the FDA, industry representatives — several of them former FDA officials — have been sitting across the table from current government officials at the agency’s offices in suburban Washington in closed-door meetings that have been going on for months.

“Also at issue in the talks is FDA oversight of advertising and promotion. Members of PhRMA, the trade group, are voluntarily submitting commercials to the FDA, but want the agency to examine the ads quickly so the companies can craft campaigns and buy airtime efficiently. One early industry proposal was for a 30-day deadline, but discussions later moved toward longer time frames, according to the people with knowledge of the matter.” [WSJ]

I suspect that more than the 30-day deadline is on the table. AstraZeneca’s original proposal suggests several tradeoffs desired by the industry. For example, AZ proposed that any pre-approved ad should be exempt from a subsequent finding by the FDA that the advertisement is misleading or inaccurate.

What next? Demanding that any drug approved by the FDA never be recalled?

In a perfect world where conflict of interest does not exist and where money does not talk, this might be a good idea. The FDA is already riddled with conflicting interests and the public doesn’t like it (see FDA Gets a “C” from the Public).

“Some former FDA officials, including David Kessler, who launched the user-fee initiative when he was FDA commissioner — and the payments were much smaller — say the negotiations raise troubling questions. “There is no doubt that user fees give the industry leverage on setting the agency’s priorities, because of the negotiating process,” says Dr. Kessler, now dean of the medical school at the University of California, San Francisco. “There are significant risks, especially when a growing percentage of the budget comes from user fees,” he says…[WSJ] 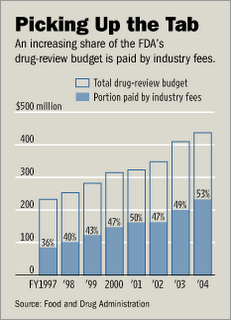 In 1993, only 7% of the FDA’s drug review budget was paid for by the drug industry. Today, that percentage is 53% and the agency is currently seeking even more money from the industry. If it gets what it wants, the percentage would be 66%!

Nobody is going to tell me that the industry is not going to have a commensurate say in how that money is spent by the FDA. Therefore, look for pre-approved DTC ads that can never be recalled and no more FDA warning letters!

Yet, that scenario may be better than what we currently have — review by FDA after the fact (if at all). Many drug product managers are said to win kudos from their peers if they have FDA warning letters framed on their walls. That is, it’s a common practice to come out with a violative ad and later get slapped on the wrist by the FDA.

It should be noted that PhRMA’s Guiding Principles on Direct to Consumer Advertising doesn’t call for a mandatory review of ads by FDA. For reasons stated above, not all pharmaceutical companies may want mandatory review. But, if they were to get the guaranteed exemption from FDA warning letters, that would be a sweet deal — warning letters, while ineffectual, are bad PR.

No Funds to Fight Counterfeit Drugs for You!
I also note that for all the industry’s PR on the need to fight counterfeit drugs as part and parcel of its war against Canadian pharmacy terrorism (see “PhRMA Intern Tackles Terrorists!“), it appears to have no stomach for forking over money to the FDA to aid the fight. According to the WSJ, “The companies have balked at other FDA suggestions that would, among other things, route user-fee money toward fighting drug counterfeiting.”

It doesn’t appear that most Americans see as much a threat from Canada as does the FDA and the drug industry.

Two-thirds of Americans strongly believe a law prohibiting pharmaceutical imports from Canada and other countries is intended to protect drug-company profits and only 9% feel strongly that it helps protect Americans from potentially harmful drugs, a WSJ.com/Harris Interactive polls shows. (See “Most Americans Support Legalizing Drug Imports From Canada, Poll Finds“.)

57% do NOT agree with the statement “The law banning pharmaceutical imports from Canada and other countries helps protect Americans from potentially harmful drugs” vs. 36% that DO agree.

Hurray for the wisdom of the American public to see through the “terror” tactics being employed by the industry to stop drug imports!