I have noticed recently that more and more Rx drug Web sites like www.caduet.com and www.rozerem.com are using video clips.

The new use of video often helps drug Web site visitors navigate through the site, explain concepts, or provide testimonials. The same actors are used in the online videos as in the TV commercials, which makes sense in terms of integrating TV and the Web. It also makes economic sense — most likely the Web video scenes are shot at the same time that the TV video segments are.

This could presage a boon for creative use of video on the Internet, but I don’t think so. Let me explain my thinking on this, which can be summarized as follows:

I offer the following data in support of my thesis.

According to an article in today’s Wall Street Journal,”A rapidly multiplying number of TV networks, startup firms and Web portals are rushing to feed a growing demand for Web video.”

This growing demand for Web-based video is coming at just the right time for ad agencies that depend upon TV ad production for the majority of their profits. TV ads are less effective than they used to be and many experts see a trend away from TV ads, which would hurt these agencies. As reported by my colleague Rich Meyer over at World of DTC Marketing, for example, “A new survey done by the Association of National Advertisers (ANA) and Forrester Research, Inc. found that 78% of marketers feel that traditional TV advertising has become less effective in the past two years” (see “TV Ads are less effective (DUH!)”). 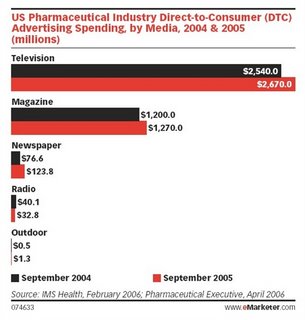 Pharmaceutical companies continue to spend a lot of money on TV ads.

Prescription drug advertising is ranked #3 in Q1 2006 ad spending by Nielson Monitor-Plus. During that period $1.05 billion (6.6% more than the corresponding 2005 quarter) was spent by the drug industry on Rx drug advertising — by which I mean direct-to-consumer (DTC) advertising. Approximately, 65-70% of that is devoted to broadcast TV ads (you do the math: see Figure, left, courtesy of “Pharmaceuticals Online: Direct-to-Patient Becomes a Reality,” a report by eMarketer).

New Medium, Same Ads
Aside from repurposing TV video footage for Web use as in the two cases I mentioned above, you will also be seeing Rx drug ads inserted into online video hosted by consumer magazines. That’s what the WSJ article is about:

“Increasingly caught up in this stampede are magazine publishers, anxious to get their hands on video ad dollars that typically have been beyond their reach. Advertisers have long regarded television as the preferred medium for marketing, pumping as much into TV as into magazines and newspapers combined — roughly $50 billion last year, according to TNS Media Intelligence. Spending on online video ads is now taking off and is expected to increase to about $1.5 billion in 2009 from a projected $385 million in 2006, according to eMarketer.”

The automotive industry is already inserting ads in video on the Web and there may already be drug ads in Web videos offered by CNN or Time or some online consumer publication.

At the moment, excluding paid search, the 13 major pharmaceutical companies spend only 2.6% of their “measured media spending” on “measured” online advertising (according to Advertising Age as reported by eMarketer, op cit). You can quibble about this number — eg, how much paid search adds (eMarketer says paid search could account for an additional 40% of prescription drug online advertising) — but the fact is it is a LOW percentage in both absolute and relative (to other industries) terms.

I suspect that soon the dynamics will change and drug companies will be spending much more money on online advertising than some experts are predicting. But the new money will not be going to search or creative use of the Internet. It will be going to placing standard TV drug ads within online videos offered by publishers.

Imagine Golf Digest, for example, offering a video of a golf expert explaining how to improve the accuracy of your putts. Before you can see the lesson, however, up pops a Viagra ad about improving the quality of your “putz!” Hey, it could happen!

Here’s Why
I predict that pharmaceutical companies will continue to take money away from the $2.7 billion or so they spend on broadcast TV ads and spend it placing the same ads online. And just as 70% of a drug brand’s offline DTC budget is devoted to TV, I predict that by 2008, 70% of the online budget will be spent on placing TV video ads online as just described. The result will be much fatter online budgets than predicted by eMarketer.

This will be a boon for ad agencies that specialize in producing TV ads but will be a bane for creative and effective use of the Internet to truly educate consumers about pharmaceutical products. DTC on the Web will be as bland and uneducational as DTC on TV!

Which Way Will DTC Wind Blow?