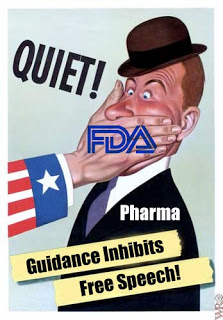 Pfizer submitted comments to Docket No. FDA‐2009‐N‐0441 regarding Promotion of FDA‐Regulated Medical Products Using the Internet and Social Media Tools (find it here).

The world’s #1 pharmaceutical company stands alone in calling upon the FDA to develop new regulations for the Internet and social media rather than issuing guidance that puts an “interpretative gloss” on existing rules.

“FDA should not try to fit the square peg of Internet and social media communications into the round hole of the Agency’s existing rules developed for conventional media,” said Pfizer in its comments. “Rather, FDA should develop comprehensive new rules describing the actions manufacturers must take in order for their online communications to be truthful and non-misleading in the specific context of the online environment. The Agency should ultimately establish these new rules not in guidance — which by definition cannot change existing rules but can merely provide an interpretive gloss on those rules — but rather in new regulations. As discussed below, the public health would be benefitted by the establishment of binding, legally enforceable new rules that have been developed by FDA specifically for new media.”

Pfizer contends that “for FDA to regulate in this sensitive area through guidance instead of rulemaking inherently raises First Amendment concerns because of the nature of the process used to develop guidance, and the nature of the Agency pronouncements that result.” Guidance, says Pfizer, is too vague and engenders “extensive litigation.”

I don’t know if that is a veiled threat or not, but Pfizer “believes it would be imprudent for FDA to repeat this pattern of seeking to address an entirely new field of conduct, where First Amendment rights are clearly at stake, without the discipline that comes with a rulemaking proceeding. Further, since the WLF litigation, the courts have only become more aggressive in policing FDA regulation of speech.”

Ah Ha! WLF — the Washington Legal Foundation, an organization “devoted to defending and promoting the principles of free enterprise and individual rights” (mostly for pharma companies) — rears its head! I suspect, in fact, that the WLF wrote the first draft of Pfizer’s comments or maybe it was Arnie Friede, former Pfizer Chief Counsel.

Pfizer predicts that vague guidance will inhibit companies from engaging in social media: “Many manufacturers simply will decide, as a risk management matter, that they will not engage, irrespective of any guidance from FDA, because the enforcement discretion reference means that the Agency regards that engagement as potentially violating a statutory or regulatory provision.”

In other words, Pfizer believes guidance would stifle pharma’s use of the Internet and social media rather than encourage it, which Pfizer implies should be the goal of FDA. “Such an approach [issuing guidance rather than new rules] would not be ideal, however, if FDA genuinely wants to encourage manufacturers to increase their level of engagement in online activities.”

Is This the Typical Mobile Health App Developer Hired by Pharma?