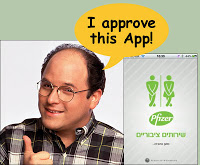 “Has anyone download this Pfizer app? (only available in Israel). Terrific idea! http://t.co/JAMzbIa4 #mhealth”

When Fabio says something is terrific, I have to see it.

The app he was talking about is Pfizer’s ‘public restroom’ iPhone app, which targets consumers in Israel. BTW, there are in fact no public toilets in Israel!

So, how do you find a public toilet where there is none?

“We launched a GPS app that locates the nearest toilet – restaurants included!”, said Tali Rosin, public affairs and policy manager with Pfizer Israel. According to a reviewer (here), “users can add toilets not already in the app’s database, and can also grade toilets they visit for criteria such as cleanliness, availability of toilet tissue, or whether they needed to ask for a key.”

Now THAT’s a mobile app that George Costanza would rate among his TOP 25! Actually, Pfizer’s app was among Apple App Store’s coveted “Top 25” most-downloaded apps and was downloaded over 15,000 times in about 3 months after it was launched in September 2011.

You could refer to this app as the Mobile George Costanza Public Toilet Finder:

The app is designed to raise awareness about Overactive Bladder (OAB). People with OAB would find this app useful because the condition is characterized by frequent urges to urinate. I bet it’s also useful for tourists.

NOTE: It’s only useful if the database includes good coverage of a city with lots of ratings from other users. Otherwise, it’s a simple matter to walk into any restaurant and ask to use the toilet. You don’t need an app for that! I suspect there are a lot of “George Costanzas” out there who may not have OAB, but like to know where the best toilets are located, just in case.

The app also includes an RSS function that automatically sends news feeds to the app. I am not sure what kind of news — maybe tweets from Pfizer. Interestingly, it also facilitates calls from within the app to Pfizer’s hotline.

Pfizer claims that the app has a positive ROI and has lead to an increase in product sales (I suppose for Toviaz, its OAB drug; see here).

Mass Media DTC Trumps Mobile Marketing
So why don’t we see such “innovative” smartphone pharma apps here in the U.S.?

Another reason why the availability of DTC marketing in the U.S. leads to minuscule eMarketing is that brand managers spend so much on mass media DTC there is very little left in the budget for “e” of any sort and a big chunk of that goes to building web sites and buying search engine ads to drive traffic to those web sites, IMHO.

Blame the Doc, Not DTC!