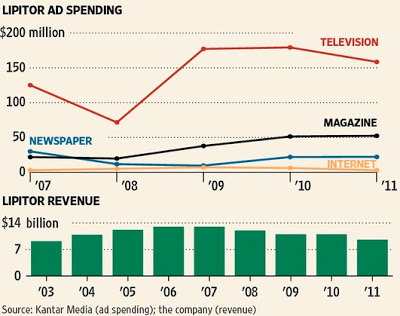 Despite Pfizer’s heroic and unprecedented effort to maintain Lipitor’s market share after expiry last November and after spending “more than $87 million promoting the medicine, the world’s biggest drug company is quietly giving up on its once-great cash cow for good because more generic versions will soon be going on sale” (see this Wall Street Journal story: “Farewell after all, Lipitor“).

As I reported here on Pharma Marketing Blog on May 2 (see here), Pfizer’s Lipitor co-pay card/PBM discount plan failed to meet its goal of maintaining a 40% share of the combined market for Lipitor and its generic equivalents for at least 6 months after generic brands are launched. As reported in the WSJ (op cit), Lipitor’s U.S. market share is 33% after 5 months (more generics will come on the market after May 31).

Although Pfizer will say that its program was a succes, the program has not met its sales goal and is considered a public relations failure by some people in the industry. A pharmaceutical marketing VP attending a recent conference referred to my blog posts “Occupy Pfizer! Protest It’s Deal to Block Sales of Generic Lipitor! #OccupyPFE” and “Do Drug Coupons Hurt Employee Health Plans and Ultimately Employees?“

But after spending more than $87 million promoting Lipitor in recent months, Pfizer officials told The Wall Street Journal that the company is “no longer negotiating new contracts to sell Lipitor to health plans, which are signing up to sell generic versions at far lower prices. The company recently stopped sending sales representatives to promote Lipitor to doctors and halted advertising in print, on television and online, which once commanded a $271.9 million yearly budget.” Here’s a chart showing Lipitor’s direct-to-consumer (DTC) advertising budget over the past 9 years:

[Note the minuscule proportion allocated to “Internet” ad spending. I cannot see from this chart what the $ amount is!]

The elimination of $220 or so million in Lipitor DTC advertising will, I predict, result in a 3% drop in overall DTC advertising in 2012 compared to 2011 (see “Lipitor Holds Key to DTC Ad Spending in 2012“). But that is only the tip of the Lipitor marketing budget, which totaled over $660 million in 2010. Included in that number is marketing to physicians and samples (see here).

When that much money is taken out of the Rx brand marketing equation, there are bound to be repercussions within Pfizer itself and within marketing communications companies that provide services to Pfizer. Meaning, of course, jobs will be lost. Perhaps that correction has already occurred. Or perhaps there are more layoffs to come.

User Fees for DTC Ad Review All Over Again