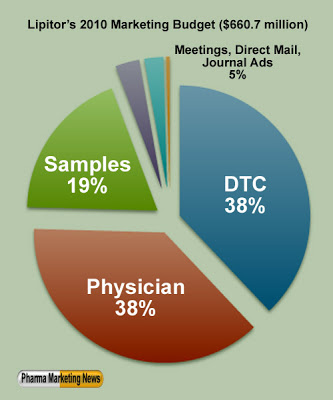 Pfizer is the world’s most “innovative” drug company, not in terms of developing new drugs to treat, for example, high cholesterol — which it failed at spectacularly (see “Why Pfizer Flopped“), but at keeping old drugs on the market beyond their patent expiration date and competing with generic drug companies. I am referring, of course, to its efforts to keep Lipitor on the market competing with generic versions after Lipitor’s Nov 30, 2011, expiry date. Lipitor Won’t Go Gentle Into that Good Generic Night! as I commented on in a previous Pharma Marketing Blog post (see poem here).

The first phase of Pfizer’s innovative “Save Lipitor” plan was an unprecedented level of direct-to-consumer (DTC) marketing of Lipitor. In 2010, Pfizer was the biggest DTC spender — it’s $967.5 million DTC budget for that year was more than double the DTC spend of its closest rival, Eli Lilly (see “Double Dip in DTC Spending Plus 33% Drop in Internet Display Ad Spending!“). Of that amount, approximately $251 million was spent to advertise Lipitor to consumers. An additional $410 million was spend promoting Lipitor to physicians ($1500 of which went to “wining and dining” my physician; see “Physician Bailout: On Average, Pharma Pays Every US Physician Over $750 Per Year“) and supplying free samples (see chart below).

Just a week or so ago, I learned that Pfizer reached a deal with several PBMs — middlemen between drug companies (the sellers) and insurers and employers that sponsor insurance plans (the buyers) — that would compel many drugstores to block prescriptions for a generic version of Lipitor (see “Occupy Pfizer! Protest It’s Deal to Block Sales of Generic Lipitor! #OccupyPFE“).

Now, according to this WSJ article, Pfizer is planning to sell Lipitor at generic prices directly to patients. “If successful,” says the WSJ, “the risky move could rewrite the industry’s playbook for selling medicines.” So, THAT’s the “Playbook” Pfizer is writing (see back story on that here).

All this sounds like good news for patients like me who have been advised by their physicians to switch to Lipitor because “it’s a second generation statin that will be available in generic form.” But wait! First of all, my drug plan has to be in cahoots with Pfizer to offer it to me at the generic price (actually, to request pharmacies and PBMs it works with to NOT substitute a true generic version of Lipitor when my doc writes “Lipitor” on the script).

But the savings will not be passed on to employers who will pay higher rates to keep Lipitor on their plans’ formularies. What are employers likely to do in that case? They’ll pass the added expense on to their employees by requiring them to contribute more to their health coverage!

Social Media Listening by Pharma: Do the Ends Justify the Means?