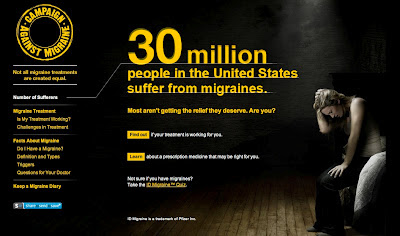 Sometimes, you make a mistake and want to “take it back.” I understand that. But this electronically-connected world in which we live is making it much more difficult to truly delete e-mails, text messages, and tweets from the network.

This is how the tweet looks as posted to the News Direct from the Pharma Industry Forum of Pharma Marketing Network (here), which I own and “curate”/administer.

This is how I keep up with tweets from major pharmaceutical companies: I use my forum software to automatically scan the Twitter feeds of selected pharma companies and post tweets from these Twitter accounts to the above forum. Because I am “subscribed” to this forum, I get daily email notices whenever these posts are made. That’s how I learned about this tweet from @Pfizer_news.

It seems like an innocent enough Tweet and looked interesting – I wanted to see what the “campaign for migraine relief” was all about, so I clicked on the link in the tweet: http://t.co/dhp1shpv, which is Twitter-shortened link.

I was surprised when the link above took me to http://www.relpax.com/, which is the branded website for Pfizer’s Relpax migraine drug. I found nothing there about the “campaign for migraine relief” as was promised by the Tweet. That’s the deceptive aspect of the Tweet.

NOTE: If you search on “#CampaignAgainstMigraine” you can find reference to the same tweet. The link, however, leads to http://inagist.com/, which no longer lists the tweet.

So, what’s the big deal? Obviously, it is deceptive to link to a drug.com site as part of a message that implies you will be joining a campaign against a debilitating medical condition! Hopefully, grownups at Pfizer recognized this mistake and deleted the tweet. But, as I said in the beginning, the tweet lives on — at least on the Pharma Marketing Forum mentioned above.

Followup (8 June 2012): @Pfizer_news “retweeted” with the CORRECT link this time: “Join the campaign against migraine. bit.ly/KcaV5i #CampaignAgainstMigraine” As I suspected, the link is to the site I found via Google, not to the REPLAX branded website. Hat tip to Amber Williams (@williaqj) for alerting me.