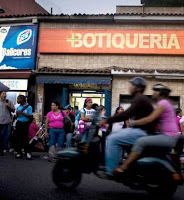 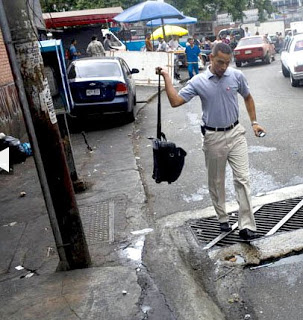 “Julio Rodriguez was on a sales call at a clinic in this slum overlooking Caracas recently when he heard four gunshots go off nearby,” is how the Wall Street Journal begins its story of Big Pharma’s newest “strategy” to “target the working poor in the developing world” (see “Drug Firms See Poorer Nations as Sales Cure“).

Shown in the photo on the left is Mr. Rodriguez — a Pfizer sales representative in Venezuela — walking through one of Latin America’s most dangerous neighborhoods.

Looks a bit like Washington Heights in NYC where I used to live while attending graduate school (see here)!

“To avoid attracting attention, he wears a polo shirt with a red logo, the color worn by supporters of President Hugo Chávez.”

Yeah, he “blends” with that shirt!

On the right are some other people in that neighborhood. None of them seems to be wearing a red logo on their polo shirts. Wait! None of them even have a polo shirt!

I don’t know if Pfizer has any sales reps in Washington Heights dodging bullets to bring Lipitor to the “working poor” of THAT neighborhood. If there are any, I suppose they are wearing Obama logos on their polo shirts!

Why is Pfizer “targeting” working poor in “developing” nations — as opposed to the working poor of this nation?

“For the first time in a half-century, sales of prescription drugs are forecast to decline this year in the U.S., historically the industry’s biggest and most profitable market…As a result, developing countries like Venezuela have begun to look more attractive to the industry. Sales of prescription drugs in emerging markets reached $152.7 billion in 2008, up from $67.2 billion in 2003, according to IMS Health, which tracks the industry. IMS forecasts sales will climb to $265 billion by 2013.”

Pfizer is offering some pretty choice deals in these countries. For one thing, it gives away computers to doctors and pays for their Internet access. Of course, the docs have to sign a waiver stating they understand they’re not intended to influence their prescribing.

Dr. Serrano is one of the docs receiving the kickback… er, I mean free gift with no strings attached. He says the 40% increase in the number of Pfizer drugs he prescribes since Mr. Rodriguez started calling on him in late 2007 was not due to the free gifts. “There are some illnesses that have to be treated with a good product, no matter what the cost,” Dr. Serrano says.

Not all Venezuelans are as gullible (maybe corrupt is a better term) as Dr. Serrano. Luis Osuna, a member of the working poor class, “was happy when the pharmacist gave him a generic version of Pfizer’s Zithromax that cost $12. ‘I don’t think there was too much of a difference,'” he says.

Not until the Obama administration and Congress pass legislation overhauling the health-care system, including provisions that could lower the cost of medicine, would we see Big Pharma lowering prices in support of the working poor in the good, ole USA!