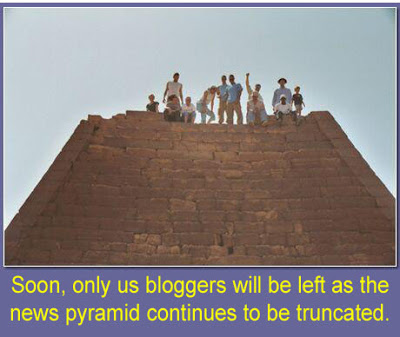 Assembled there were some of the best and brightest people in pharma corporate communications, including at least a dozen people from Pfizer. Unfortunately, Ray Kerins, Pfizer’s Head of Global Media Relations, couldn’t make it. He is in China with Jeff Kindler, Pfizer’s CEO.

Hosting a conference inside the “belly of the beast” is a novel idea. I say “beast” in the most respectful manner. Pfizer is a “beast” in more ways than one. It is, for example, the #1 pharma company in the world in terms of sales. And when it finally swallows up Wyeth, there will be about 130,000 people employed by Pfizer — at least before the inevitable layoffs happen.

But Wyeth employees won’t have to worry about the Pfizer medications they are taking because they may qualify for Pfizer’s MAINTAIN program, which offers free Pfizer drugs to people recently laid off. “Laid off, but still getting laid!” is how some news reporters describe this program, according to Sally Susman, Senior Vice President & Chief Communications Officer at Pfizer, who gave the Keynote Presentation.

Susman formerly worked for Estee Lauder, where everyone was sure she had a much easier job with better freebies than she has at Pfizer. She put this into perspective by citing some poll results showing an increasing public animosity towards the healthcare industry: 42% of Americans trust healthcare industry to do the right things — a 16% drop from last year.

But the main worry among PR professionals is the “rapid” decline in traditional media and the evolution of new media (more than the economy, the rise of new media was considered the #1 global issue facing pharma PR, according to audience poll results). This was also something Kerins referred to last week at the BDI social media conference (see “Pfizer’s Social Media Strategy: Piss Off John Mack, Get Hundreds of New Followers!“).

“We’re not dead yet,” said a newspaper guy in audience. He pointed out that only 100 out of 7,000 newspapers nationwide went out of business last year. Susman and others noted, however, that cutbacks across the board at newspapers left fewer beat reporters to cover the pharmaceutical industry. As Susman described it “there are fewer outlets for promotion.”

Of course, there are many, many MORE outlets available to pharma PR people for promotion, most notably blogs. That’s the real problem for PR professionals who are not sure how to leverage bloggers like they have learned to leverage pharma beat reporters. They worry that bloggers are not professional journalists and have no uniform code of conduct. And there are many, many bloggers out there to contend with.

PR people are used to issuing press releases to a few journalists at the top of the traditional news pyramid. When the top was blown off by the social media revolution, these professionals had no proven mechanism by which to reach the many thousands of bloggers at the BOTTOM of the pyramid — until now. That mechanism is Twitter, which is being adopted rapidly by most pharmaceutical companies (the latest is Astellas, see @AstellasUS). “Twitter works,” said Co_chairperson Karen Carolonza, principal at Green Room Public Relations. “Whoever thought I would mention Twitter and pharma in the same sentence!”

PR people refer to social media as “evolution, not revolution.” IMHO, they are wrong. We all are uncomfortable with revolution, which means we have to completely and radically change the way we do business. We much prefer “evolution,” which implies we just have to make a few adjustments and adapt gradually to change. That’s why many pharma PR people are beginning to schmooze bloggers as they do reporters — by having them over to dinner (see “Thank You Johnson & Johnson for Dinner“) and inviting them to “roundtables” (see “Chantix ‘Roundtable’ Apparently Not Round and Not a Table“). [Also see “A New Era of Pharma Marketing: Direct to Journalist (DTJ)” for other tactics employed.]

Personally, I do not mind being invited “inside the tent.” Ray Kerins was kind enough to go out of his way to make sure I was able to attend yesterday’s conference. But I am not going to act like a journalist here in this blog. I think most people like me blog in order to put their personal spin on issues of importance to them. I’m interested in checking the facts, but I am not going to call the PR department every time I post something to Pharma Marketing Blog. If you have been reading this blog for some time, you know about the many instances when I have called or emailed the corporate communications people at pharmaceutical companies and never heard back from them. This problem was pointed out by several speakers at yesterday’s summit.

It’s been a lazy, slow moving world for PR up until now. Beat reporters used to work months on a story and had well-defined deadlines. PR people always began a conversation with reporters with “What’s your deadline?” — a question that has lost its significance in a world where the deadline for every story is NOW!

But reaching out to bloggers like me is not the revolution, it’s part of the evolution that pharma PR people are trying to create. No matter how much they reach out, they will not be able to control the news, which is what they want to do.

The real revolution is people telling their own stories, creating the news that other people want to read. Pharma PR people understand this and they will co-opt the revolution, not just adapt to the evolution of media. They want, for example, to “change the debate” about drug pricing and one of the chief tactics they use is to get patients to tell their stories. This is how social media is currently being employed by pharmaceutical companies. It’s not about the brand, it’s about survival of the pharmaceutical industry.

Hopefully, the social media revolution will not be “televised” as was the fate of a previous “revolution” I witnessed.

P.S. I hope and trust that all the PR people I met yesterday continue to invite me into the tent. I would like to invite you all to a roundtable discussion of the issues I raised here. I wasn’t able to collect all your cards. Let’s get connected through LinkedIn. My profile is here: http://www.linkedin.com/in/pharmaguy

Pfizer Inc: Working Together for a Healthier Investor™