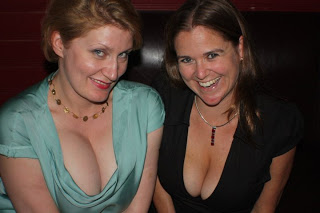 Last week I attended the DigiPharm EU conference in London and had a great time meeting old friends and people I have only interacted with through social media such as Twitter and FaceBook. Several EU pharma people presented at the conference, including candidates for the Pharmaguy Social Media Pioneer Award. I’ll have more to say about these people and their presentations later, but right now I’d like to focus on me.

First of all, I gained 2 lbs! It was the English comfort food I was exposed to at a couple of tweetups and during the buffet lunch at the conference. Food such as bangers and mash, roasted pork belly, and Shepherds pie. And the drinking!

I blame it all on Alexandra Fulford (@pharmaguapa) and Sam Walmsley (@sammielw), two English women who are my new best friends on FaceBook.

Alexandra coined her Twitter handle after some Spanish guy said she was “muy guapa,” which means “very pretty.” Of course, I immediately said I was going to reserve “pharmaguapo” — handsome pharmaguy — as a new twitter handle.

I don’t think anyone in Spain would say I was “muy guapo,” but Miguel A. Tovar (@blogaceutics), who is a native of Barcelona, was happy to see me and I him.

Alexandra likes to cook and gave me some Aromat Savoury Seasoning, which I smuggled back to the US. I used it last night to season my roasted chicken and salad. Alexandra, meanwhile, cooks Bangers and Mash for her lunch! I look forward to having Alexandra on my BlogTalkRadio show as a guest and learn more about her pharma-related expertise. We’ll also talk about cooking.

Sam Walmsley and I shared an interesting Q&A session at the DigiPharm conference. Sam is the head of digital & social media at Chandler Chicco Companies, an advertising agency. One question Sam came up with was “Did a ‘Mack Attack’ help your brand?”

I didn’t have to explain what a “Mack Attack” was because I had just finished my presentation (find it here), which included a reference to my famous attack against Novo Nordisk’s Levemir-branded tweet (see “Novo Nordisk’s Branded (Levemir) Tweet is Sleazy Twitter Spam!“). I don’t know if that attack helped Levemir sales, but I am sure it helped drive traffic to the @RaceWithInsulin Twitter account and Ambre Morley (@ambremorley), Associate Director of Product Communications at Novo Nordisk always favorably refers to me in her presentations.

“The ‘Mack Attack’ helped us internally tremendously,” said von Gordon. “Our US colleagues cried ‘fire’ and as a consequence I had three US lawyers [contact me] complaining about what headquarters in Europe was doing.” It turns out that the US lawyers were “terrified that the FDA would see the Mack Attack.”

von Gordon said BI learned from this experience. “The [Mack Attack] helped us define our position,” said von Gordon, “what can we do, how far can we go. More importantly, we learned we can contact John and have a debate on his website (see “Pharma on Twitter: Boehringer Ingelheim“).”

I was very happy to hear von Gordon’s comments and hope that all the pharma “victims” of a “Mack Attack” agree with her. But you don’t have to be a Mack Attack victim to be a guest on my Pharma Marketing Talk show or a candidate for the Pharmaguy Social Media Pioneer Award. Just send a message to pharmaguapo@pharma-mkting.com and ask if you qualify!

I am Off to London to Meet Some EU ePharma Pioneers...