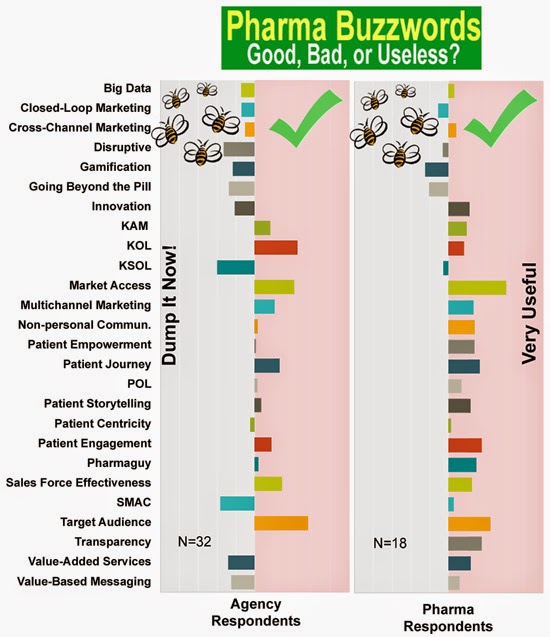 Pharma marketers cannot communicate with each other without using “buzzwords.” Some critics suggest, however, that some of these buzzwords alienate patients and physicians (see, for example, “Do Marketing Buzzwords Affect Pharma’s Reputation Among Patients & Physicians?“). According to results to date of a new survey, even pharma insiders think there may be too many terms that just are not useful and should be dumped!

Before I present some preliminary results from that survey, I’d like to show you a real world example of the use of buzzwords mentioned during an industry conference, specifically the Transforming Healthcare Conference that was hosted by MM&M in NYC yesterday.

I wasn’t able to actually attend that conference, so I followed the Twitter stream from the conference via the unfortunately very long #transforminghealthcare hash tag. Of course, this method may not have revealed all the buzzwords that were actually mentioned by presenters at the conference. But terms become “buzzwords” only when they are repeated –i.e, when they create “buzz”!

To keep track of the buzzwords, I used my handy Pharma Buzzword Bingo Card! Whenever a buzzword (or equivalent term) on the Card was mentioned in the Twitter stream, I drew a diagonal across the term in the Card.

Here’s what my Card looked like at the end of the day: 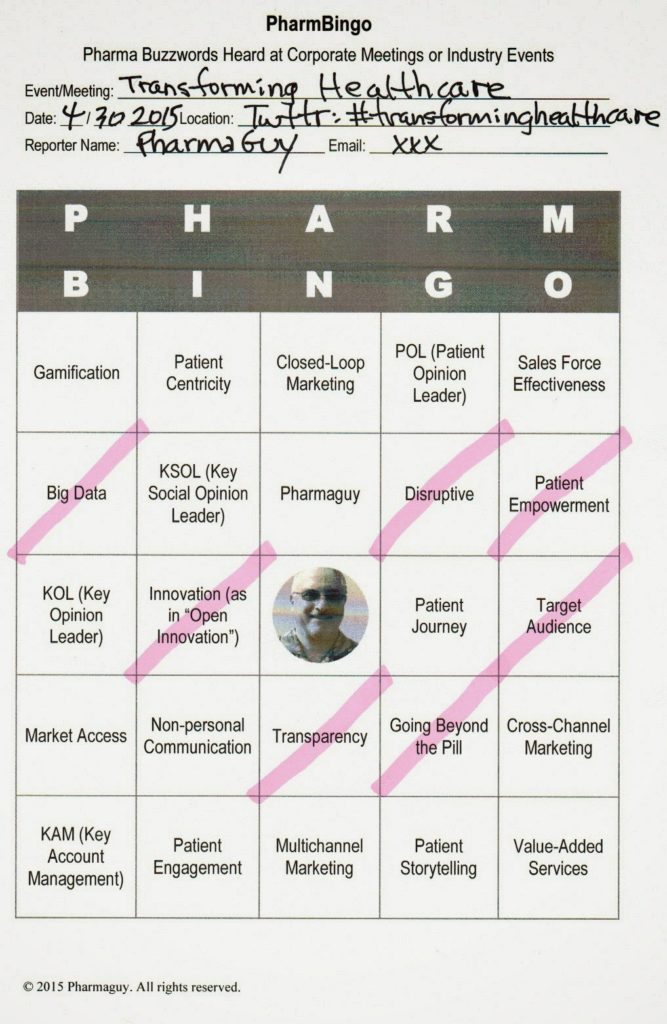 Although I didn’t win at PharmBingo, I was able to mark off 7 out of 24 buzzwords. Thus, this conference has a buzzword score of 29%. I don’t know if that is high or low because it has to be measured against a benchmark of some sort. The only thing I can do is to repeat the process for other conferences and see how they compare with one another. You can help by downloading your own Pharma Buzzword Bingo Card here and emailing me (pharmaguy at pharmaguy.com) a scan of one you completed.

Now the preliminary survey results I mentioned at the start. The following chart shows how pharma marketers employed by agencies and within pharma companies view the list of buzzwords included in the Bingo card.

Note: This is an updated version of the chart. The previous version – published this AM – had the “Dump It Now!” and “Very Useful” reversed.

Anyway, I think the differences in opinion regarding a few terms are interesting. Take KSOL, for example. I think this term was invented by an agency (see You Think “KOL” is a Toxic Term? What About “KSOL?”) and it appears that pharma people have not yet fully embraced it. “Value-Added Services” also may have been invented by an agency, but I am surprised it doesn’t seem popular with pharma people.

Pharma’s Facebook Free Ride is NOT Over! Take Advantage of This...