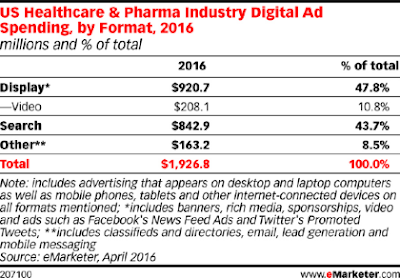 Over the years I have tried to determine what portion of pharma’s total marketing budget is devoted to digital and if that portion is increasing (see here, for example). Various sources look at various channels and it’s not easy to compare one source with another. Even data from the same source may not compare apples to apples.

Last month, for example, one pharma trade publication claimed that data from the Interactive Advertising Bureau showed that the pharma industry’s digital ad spending in 2015 was “about $3 billion.” But the data really applied to “Pharma and Healthcare,” which includes “personal care, toiletries, and cosmetic products”, etc. Since the latter product categories may be responsible for 50% of the $3 billion, I estimated the pharma Rx drug-specific digital ad spending was more like $1.5 billion, excluding search advertising (see “Did Pharma Really Spend $3 Billion on Internet Advertising in 2015?“).

I just came across some data from eMarketer, which seems to verify my estimate (see chart below).

Again, the pharma trade publication that published this chart said the data refer to “US pharma ad spend,” so one would assume pharma spent $1.67 billion on digital advertising in 2015, which is close to my $1.5 billion estimate derived from the IAB data. But is that true and what forms of advertising are actually included in eMarketer’s estimate?

eMarketer breaks down the digital ad spending as shown in the following chart.

Although this is 2016 data, we see that eMarketer’s numbers include search, whereas the IAB data do not. It also includes other “healthcare” digital ad spending – including marketing of “over-the-counter products, facilities, services, research, healthcare professionals, hospitals and biological products, as well as establishments providing healthcare services and social assistance for individuals” – and not just pharma Rx ad spending, which is the holy grail I am seeking. In any case, about 44% of the total ad spend is for search – this is close to my 50% estimate.

Let’s say 44% of the $1.67 billion digital spend in 2015 was also devoted to search. That leaves just $0.73 billion for display and other digital advertising for the entire healthcare industry (not just pharma Rx drug advertising). Hmmm… again assuming 50% of that is for toiletries, cosmetics and such, that means only about $0.36 billion for pharma Rx drug ad spending in 2015.

Even I think that’s too low an estimate. Also, does this estimate only include digital advertising aimed at consumers and not physicians?

Let’s assume it only refers to consumer ads. It is estimated that the pharma industry spent a total of about $5.4 billion on direct-to-consumer (DTC) advertising in 2015 (see “Annual Spending on Direct-to-Consumer Drug Advertising Ties an All-Time High“). If pharma spent $0.73 billion on digital advertising (excluding search) and all of that was focused on consumers, then, at most pharma spent only 1.4% of its DTC ad budget on digital advertising to consumers in 2015. At worst, less than 1%. Double those numbers if search is included.

These numbers are much lower than any estimate of the percent of pharma consumer ad spending devoted to digital that I have seen, which hover around 5% (see here).

P.S. According to Nielsen measured media audits (see here), pharma spent an average of $0.68 billion on digital advertising (i.e., display ads) from 2011 through 2013. Assuming no big increase in spending, that is in the same ballpark as the eMarketer estimate, which may include media spending not included in Nielsen’s numbers.

As the Klick Wire editors say, “The full report is available to eMarketer subscribers.” If you are a subscriber, perhaps you can clarify some assumptions made in this post about exactly what goes into the eMarketer estimates of digital ad spending and what portion of that estimate is actually devoted to Rx drug advertising. Or, I guess I should just contact eMarketer.

Blogs Critical of Drug Industry Are Most Credible, Says Survey