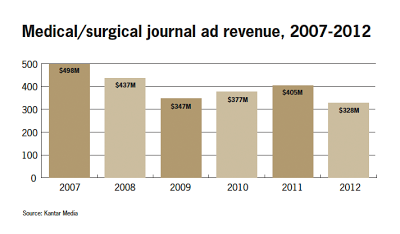 It’s interesting that medical journal ad revenue from pharma decreased about the same percentage amount as did DTC advertising as reported by CSD (see “Pharma DTC Ad Spending Took a Nosedive in 2012!“). It’s as if “sequestration” has spread to pharmaceutical marketing.

Here’s a pseudo infographic showing how the TOP 5 medical journals ranked by ad revenue did in 2012:

Will Pharma Spend More on eMarketing than on TV Advertising by...