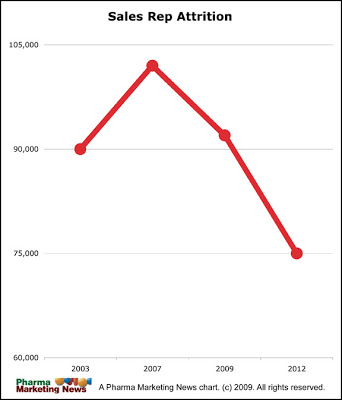 About 45,000 doctors meet with detailers using online video, and 300,000 physicians say they are open to doing so, said a September 2008 study from Manhattan Research. This trend is worldwide. Tomorrow, in an exclusive interview with Mark Bard, President Manhattan Research, we will talk about technology adoption and integration trends in physician practices across Asia (see “Taking the Pulse™ Asia: Asian Physicians and Emerging Information Technologies“).

There seems to be a correlation going on here — one that sales reps have long feared: as pharma adopts the Internet for reaching physicians, they will start getting rid of sales reps. Those that supported the adoption of eDetailing by the industry used to allay these fears by saying things like “the best eDetailing programs work hand-in-hand with the sales force” and “eDetailing should complement the sales force” (for more on the history of eDetailing, you can order the eDetailing Supplement to Pharma Marketing News. Use the discount code ‘EDET64297N’ and save $7).

You may no longer hear concerns from pharma people — except from sales reps — about eDetailing replacing sales reps. And developing programs that “complement” the sales force may now have less appeal. “Drugmakers are responding to hard times with layoffs and a shift toward online marketing,” proclaims an article in today’s American Medical News (“Doctors increasingly close doors to drug reps, while pharma cuts ranks“).

The current recession offers pharma (and other industries) a great opportunity to adopt new technology! You can lay off people and replace them with off-shore resources (see “Pfizer Pfires Thousands of Americans, Outsources Tasks to India“) and/or with new technology (eg, social media).

To be sure, visits by drug reps will not disappear entirely. The hope is that the sales force that survives the layoffs will be “better trained and have a greater depth of clinical and scientific knowledge,” according to experts cited in the American Medical News article.

Why It’s Important to Monitor & Engage in Social Media