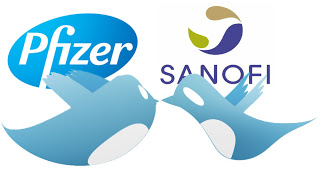 Everyone is tracking how the pharmaceutical industry uses Twitter and other social media. Jonathan Richman maintains the Pharma and Healthcare Social Media Wiki, which lists dozens of Twitter accounts (no rankings, although Jonathan does give out awards). EyeOnFDA Blog maintains its TWANK! Pharma Twitter Rankings, which is ALL about numbers, especially followers. And I maintain the Pharmaguy Twitter Pioneer list (see here).

None of these compilations says much about the quality of the content (ie, Tweets) pushed out by these sites. Some include 3rd-party measures such as Klout scores. But Klout is a poor barometer of how well pharma tweeters ENGAGE in conversation via social media. To demonstrate this, I compare recent tweets from @Pfizer_news (“The official site for Pfizer Inc., where we apply science and our global resources to improve health and well-being at every stage of life. I’m Jen Kokell, GMR”) and @SanofiUS (“The official Twitter feed for Sanofi US. Tweets on news, updates, and other info come from Jack Cox and Stacy Burch. Intended for U.S. audiences only”).

I picked these two because my friend @AndrewSpong posted this in today’s #hcsmeu Twitter chat:

“despite only having been active since Jan ’11, @SanofiUS has published nearly twice as many tweets as @pfizer_news”

To which @rohal responded:

“number of tweets is not a measure for effectivity of comm, quality of perception and understanding is!”

Sometimes marketers say “communication” when they really mean “messaging” or “marketing,” which is one-way communication. By now social media should have changed what we all mean by communication; ie, two-way conversations. It would be interesting to measure this aspect of Pfizer’s and Sanofi’s Twitter accounts.

Before I do that, let’s look at the numbers:

Except for tweets sent, Pfizer beats Sanofi hands down in this numbers game — although I am amazed that the Klout scores are relatively close considering that Pfizer has TEN TIMES the number of followers than does Sanofi. I am on record questioning how Pfizer obtained all these followers. It boosted its number of followers by about 3-4,000 in just a few days around Christmas 2009 How Did Pfizer Get So Many Twitter Followers?.

Since then, I’ve heard that Newt Gingrich has been paying to get fake Twitter followers (Gawker received a tip from a former staffer, saying that Gingrich had paid firms to create fake Twitter followers; search company PeekYou analysed his follower list, and found that 92% of them were dummy accounts. Adding insult to injury, PeekYou added that Gingrich’s percentage of real followers was “the lowest we had ever seen”; see story here).

For my case study, I merely compared 20 of the latest tweets from @Pfizer_news and @SanofiUS to see what was different about them (find my list here).

Here’s what I learned:

Self-serving Tweets: 60% of Pfizer’s Tweets (12 out 20) were self-serving in that they referred back to Pfizer press releases, blog posts, etc. The tone is overtly NON-CONVERSATIONAL; eg, “Pfizer did this…”, “Pfizer did that..” as in “Positive top-line results for Pfizer’s Lyrica in Phase 3 study of patients with fibromyalgia in Japan on.pfizer.com/ntYymj” (there’s a tweet FDA should take a look at!). In contrast, I found only 1 self-serving Tweet among Sanofi’s last 20 Tweets (5%). If I met Pfizer_news at a cocktail party, I would find any excuse to run away! (Note: Whenever I meet Jen Kokell at conference receptions, however, I look for excuses to stay put!)

Retweets: Retweeting is usually a good measure of “conversation” vs. “communication” in Twitterdom. @Pfizer_news’s Tweet stream did not include a SINGLE RT, whereas Sanofi’s included 13 (65%). I did not include one RT that retweeted from another Sanofi account. An example of a Sanofi RT: “RT @andrewspong How do we achieve equality for patients with rare diseases? http://bit.ly/pA4bdb | pharmaphorum #rarecare #hcsmeu #hcsm” Not only does Sanofi RT, but it adds hash tags, another indication that it engages in conversation rather than one-way communications.

Hash Tags: Use of hash tags is another good indicator of how well a company engages in conversations via Twitter. Eight out of 20 (40%) of Sanofi’s tweets included one or more hash tags, whereas only 2 (10%) of Pfizer’s tweets included a hash tag.

Klout may or may not look at these things when computing a score for Twitter accounts. If it does, then IMHO Sanofi’s score should be MUCH higher than Pfizer’s. But I think the numbers still outweigh the relevance for Klout and even for industry pundits; ie, Followers trump Content!