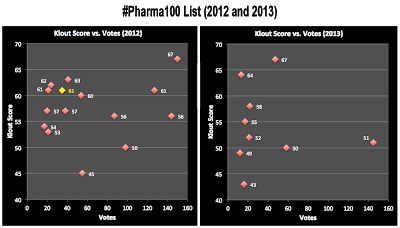 “Stop using #pharma100,” says Andrew Spong. Spong says it’s “a ludicrous popularity contest… that degrades the health conversation on the Social Web.” Quite a few commenters to his post (here) agree with him.

#pharma100 was set up by Henry Gazay, CEO and founder Medimix International, to supposedly identify the “top 100 influencers in Pharmaceutical Social Media” through a voting process: between July 4th and July 14th 2013, any one could nominate someone they considered to be among the top 100 influencers. All they had to do was post on twitter “I nominate @xxxx for #pharma100 top100 influencers in #pharma social media”.

As a popularity contest, this is innocent enough. As I said in a comment to Andrew: “Awards and community recognition are common incentives for doing a good job. I have criticized trade publications for handing out awards to their advertisers because that clearly does not reward the best but the wealthiest (i.e., able to purchase ad space; see “Awards. What Are They Good For?“). But nominating someone for recognition via a Twitter hash tag is more democratic and can help call attention to interesting people who you may want to follow on Twitter.”

But I see Andrew’s point: Many people are just adding #pharma100 to their Twitter posts even when NOT nominating someone. So many, in fact, that #pharma100 is a “trending” hashtag that attracts unsuspecting followers to relatively worthless Twitter posts.

But does #pharma100 actually identify “influencers in Pharmaceutical Social Media?”

I looked at the data from the 2012 and 2013 vote tallies and compared the number of votes of “top” people to their Klout scores (you can find this data for 2012 here). Klout is usually considered a good indicator of influence. According to wikipedia: “Klout uses social media analytics to rank its users according to online social influence via the ‘Klout Score’, which is a numerical value between 1 and 100. In determining the user score, Klout measures the size of a user’s social media network and correlates the content created to measure how other users interact with that content.”

If #pharma100 actually determined “influencers,” then you would expect a correlation between number of votes and Klout Scores. There appears to be no such correlation in either set of data — especially NOT for the 2013 data.

BTW, “someone” with the Twitter handle @LCDing is #4 on the 2013 #pharma100 list, having received 41 votes. He/she is not included in my chart because his/her Klout Score is only 14! Also, @LCDing  has only 6 followers on Twitter and starting on July 6 has posted only 69 tweets — all of which are “retweets” of other #pharma100 contenders!

So, #Pharma100 deserves to be ignored.

A Novel Approach to Communicating with Physicians