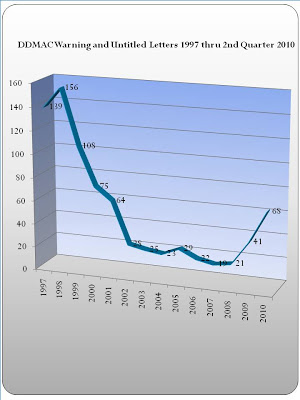 A few people helped me put together a short wish list for the US pharmaceutical industry to send to Santa this year (you can still vote or write-in your item to include on the list; see survey here).

There are only 3 items on the list so far that merit Santa’s urgent attention:

Recently, a Time Magazine journalist interviewed me for an article he’s writing on pharma’s use of social media. He was shocked to learn that the lack of guidance from the FDA is holding pharma back from doing more on social networks. Of course, I’ve always maintained that this is a red herring used as an excuse for the unwillingness of most product managers to do something different and essentially unproven.

According to a new Deloitte report titled, “To Friend or Not? New Insights About Social Networks in the Life Sciences Industry,” undefined Food and Drug Administration (FDA) guidelines, consumer privacy concerns and a lack of a clearly demonstrated return on investment are the top three hurdles to widespread adoption of social media by the pharmaceutical industry (see more survey results here). Nevertheless, 65% of survey respondents say their company uses or plans to use social networks at a company level in some capacity in the next year.

As reported by FiercePharma, “starting next year, drugmakers have to give a 50 percent discount on branded drugs for people who fall into the gap, which is between $2,830 and $6,440. Over 10 years, the cost of closing the hole could cost pharma $32 billion, the [Wall Street] Journal reports.”

Two pharma companies have responded very differently to this “deal” with democrats to help cover the gap in Medicare drug coverage. Whereas Lilly hemmed and hawed and skirted the issue and mainly defended high drug prices (see “Why Price Controls Are Not The Right Answer” and my comments here: “LillyPad Launches Specious Rocket Attack Against Drug Price Control Straw Man“), AstaZeneca seized the moment to support the coverage and explain how else it is helping senior citizens pay for their prescription drugs (see “Our Fair Share: Closing the Coverage Gap“).

Although filling the “Medicare “Doughnut Hole” will cost pharma less than 1% of US sales (see here), it can’t hurt to ask Santa for a reprieve.

(3) Of equal importance to the doughnut hole wish is pharma’s wish that the FDA adopt A regulatory pathway for the approval of biosimilars that the drug industry can live with. 22% of my survey respondents voted for this item. Biosimilars are generic versions of large-molecule patent drugs (biologics).

At one point in the negotiations with FDA, the drug industry argued that biosimilars need to be tested in humans before being approved as generic substitutions for patented, FDA-approved biologics. Marc Monseau, Director of Corporate Communications at Johnson and Johnson, once wrote: “These products [biosimilars] would be ‘similar’ to a branded product, but they would not be the ‘same’ and therefore, scientists do not consider them to be generics. Since laboratory testing isn’t enough to detect many of the clinically important differences in biologics, testing in humans will be necessary to ensure their safety and efficacy.”

Nowadays, however, the industry is focused on making sure new regulations “should include a data exclusivity period of 12 years – meaning that the FDA would have to wait 12 years after a biotech drug has hit the market before approving a follow-on version. The generic drug industry, represented by the Generic Pharmaceutical Association, as well as several consumer and patient advocacy groups, favored a five-year exclusivity period similar to the one used for pharmaceutical drugs” (see here).

(4) The last — and least important — item on pharma’s wish list for Santa is Much fewer “warning” letters from FDA in 2011. As you may know, the FDA has been sending out more of these letters during Obama’s administration. This is nicely summarized in the following chart prepared by EyeOnFDA (see here):

At this rate, the number of warning letters will get back to Clinton-era levels before the next election when a new FDA commissioner may be named by a newly-elected republication president (John Boehner?). Now that the next Congress will have a republican majority, we’re likely to see this wish fulfilled as FDA officials are grilled by Senate Committees headed by Republicans.

Not that Santa Claus is a Republican! He surely is a Democrat because he’s in favor of entitlement — all good boys and girls and even pharma companies (good or bad) get gifts!

BTW, there were a couple of write-ins for the list:

“A pipeline in a pear tree” — I have added this to the official survey voting block.

“Human Genomes Sciences’ Lupus Drug, “Benlysta”! We Lupies need this quickly-Unfortunately, I know a woman who may not see Christmas because of the FDA delay now. She’s in the hospital on a respirator, because Lupus has attacked her lungs and now kidneys. Please help her Santa!” — I can’t argue with this, which I put in the same category as “increased pipeline.”

There’s still time to get your vote in here.

The Merck and Vioxx Show