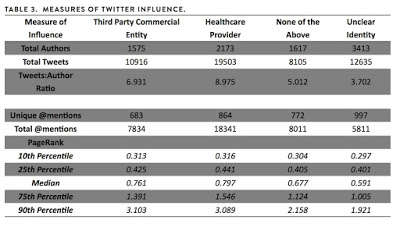 Today, I came across a Milwaukee Journal Sentinel and MedPage Today report (here) that links pharmaceutical industry payments to physicians and medical societies that determine treatment guidelines for drugs that they produce. The report focuses on the anticoagulant market and Gregory Lip, a British heart doctor with “extensive financial ties to the pharmaceutical industry. Lip has also served on treatment guidelines panels that have recommended greater use of the new [anticoagulant] drugs.

“Critics argue the financial relationships can lead to guidelines that make ineffective, costly or potentially harmful recommendations,” says the report.

But pharma uses more than money to influence medical societies and its members. They also use Twitter. Hows so?

According to a #MICEproject research report (here), “Twitter ‘backchannels’ are increasingly popular at medical conferences. A variety of user groups, including healthcare providers and third party entities (e.g., pharmaceutical or medical device companies) use these backchannels to communicate with one another. These backchannels are unregulated and can allow third party commercial entities to exert an equal or greater amount of influence than healthcare providers. Third parties can use this influence to promote their products or services instead of sharing unbiased, evidence-based information.”

Boehringer Ingelheim, marketer of the anticoagulant Pradaxa and one of the companies mentioned in the Journal Sentinel/MedPage Today report has been a pioneer in using Twitter discussions (chats) during major meetings of cardiovascular medical societies in the EU, such as the European Society of Cardiology Congress. In 2013, BI hosted the first ever open tweet chat during the conference: #ChatAfib (read “How to Host a Successful Pharma TweetChat” – also this slideshare presentation).

Boehringer had a few simple rules for the chat: an independent moderator; Not intended as medical advice; Not for discussing treatments; Follow-up on any SEs mentioned; Not intended for US audiences; 3 KOL guests, 4 set topics.

BI’s #ChatAfib was independent of the conference’s official chat hashtag: #ESCcongress2013, but it may have been promoted to physician attendees via tweets that included the #ESCcongress2013 hashtag. As you can see from the above notice, there was no product promotion, which is a concern of the #MICEproject report, which quantified the influence that third party commercial entities had in 13 major medical conferences. Here’s the data:

Regarding the issue of commercial influence via Twitter, Marie VanAssendelft-Baker, Senior Manager, Social Strategy and Community at Bayer, said in a LinkedIn comment (here):

“Interesting point. That being said, this would impact every industry… not just pharma. Outside of hashtags, there are also sponsored emails, Facebook, on-site marketing, etc. At most conferences, sponsors and companies leverage conference hashtags (and other marketing mechanisms) to promote products, appearances, events, etc. Look at CES for example, tech companies, vendors, even brands not at the event, are all grappling for attention from attendees. Why? Because those are the people they want to reach. Understandably, not all of these industries are highly regulated, but the underlying theme is similar. As long as a company or brand is transparent in the way they are interacting and are abiding by the regulations in place, then why not leverage the opportunity to engage with those that would care most about what you have to say. I think (I hope!) people are smart enough to ignore SPAM, the “hard sell” or things that do not interest them, and focus on what they want to focus on. It’s up to the brand or company to create engaging content, messaging and leverage appropriate targeting and not waste resources on ineffective promotions.”

In my podcast interview of Len Starnes, we discuss the #MICEproject report. Our discussion focused on these questions:

Len is hoping to get the opinions on these suggestions from people working within pharmaceutical and medical device companies and from healthcare professionals. Please provide you opinions here.