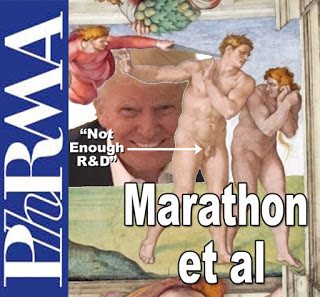 PhRMA, the pharmaceutical industry’s primary lobbying group, announced changes to its membership structure that purged 22 companies of their membership or associate membership status.

Now, to be a member of PhRMA, you have to spend at least $200 million per year spent on research and research expenditures must equal to at least 10% of global sales (click on “Read more >>” below for details).

“I cannot help but wonder if the interests of the big companies would be better served if they split from PhRMA,” said LaMattina. “The formation of a new association would go a long way to create a separate identity for the truly big pharma companies. CEOs like Ken Frazier will readily be able to point out to the world who big pharma really is. It would also bring accountability to the industry and demonstrate its commitment to not just being successful–but also doing good.”

Perhaps to forestall such a secession or perhaps to appease president Trump — who accused the drug industry of “getting away with murder” — PhRMA ousted small pharma members who are shouldering most of the blame for drug price increases. Meanwhile, Pfizer — the largest of the Big Pharma companies — won’t commit to keeping a lid on the prices IT charges for drugs (read “Ian Read – Bean Counter Pfizer CEO – Won’t Commit to Keep a Lid on Drug Price Increases“).