Yes, it’s PhRMA Intern! Strange visitor from an Ivy League school who came to PhRMA with powers and ability far beyond those of Ken Johnson.

PhRMA Intern! Who can change the course of mighty news stories, bend the truth at will, and who disguised as Emily Jameson (no relation to Jenna Jameson), mild-mannered intern for a great pharmaceutical trade association, fights a never ending battle for believability, justice for pharmaceutical companies, and the PhRMA way!

On a Blog, Far, Far Away
Our story begins last week, when blogger John Mack reported that Michael Moore accused PhRMA of sending a “spy” to the Cannes debut of his documentary SiCKO (see “PhRMA Sent SiCKO Spy to Cannes“).

“This is a pretty desperate attempt to drum up some publicity,” said Johnson. “Billy [Tauzin, CEO of PhRMA] had nothing to do with this. I spent 15 years in Washington, and made a lot of friends from Hollywood. And one of them, who I’m not going to drag into this [let’s call him Mr. X], called to tell me about it. And I got some pretty good blow-by-blow. But we didn’t have a spy there, and we didn’t send anyone there. It was a friend from the motion picture business.” (see “PhRMA: We Didn’t Send A Spy To Cannes!“)

What Ken failed to mention, however, is the role PhRMA Intern played behind the scenes “negotiating” the deal with Mr. X. We can now tell the complete story …

How PhRMA Intern Made a Movie Mogul an Offer He Could Not Refuse!

ON THE FIRST DAY OF HER RETURN TO PhRMA’S WASHINGTON, DC OFFICES, PhRMA Intern — DISGUISED AS MILD-MANNERED EMILY JAMESON — WAS DISTURBED BY ALL THE POSITIVE PUBLICITY THAT MICHAEL MOORE AND HIS ANTI-PHARMA MOVIE ‘SiCKO’ WAS GETTING.

ALTHOUGH OTHERS HAD BEEN INVITED TO SPECIAL PRE-RELEASE SCREENINGS OF SiCKO BY THE PRODUCERS (see, for example, “John Mack Finally Gets His SiCKO Screening: You Can Too!“), EMILY HAD A BETTER IDEA … 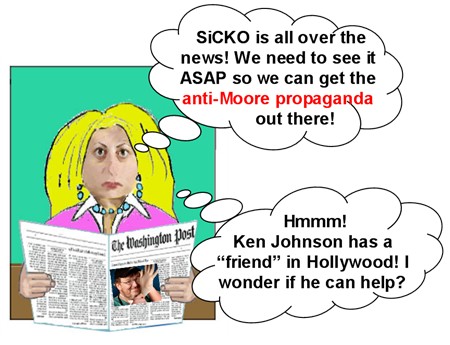 AS SHE HAS DONE OFTEN IN THE PAST, EMILY RUSHED INTO THE OFFICE OF ACCOUNTABILITY TO CHANGE INTO HER ALTER EGO… 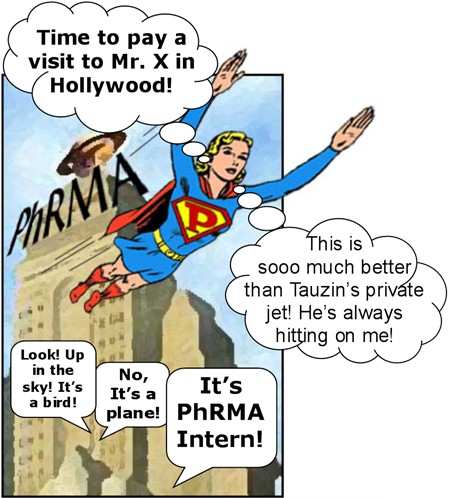 PhRMA Intern, ON HER WAY AGAIN TO CHANGE THE COURSE OF A MIGHTY NEWS STORY!
ZOOMING THROUGH THE SKY AT 10 TIMES THE SPEED OF SOUND, PhRMA Intern SOON REACHES HER DESTINATION.

SOON SHE IS GREETED BY A GREAT HOLLYWOOD MOVIE MOGUL, WHOSE NAME WE SHALL NOT “DRAG” INTO THIS, BUT MERELY CALL “THE MYSTERIOUS MR. X”! 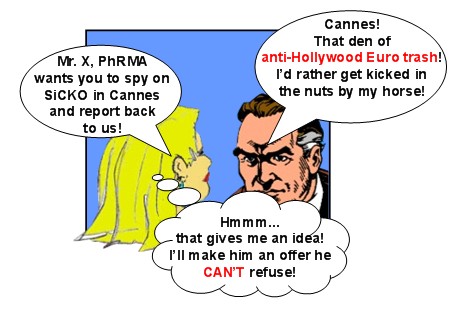 THERE IS SOME CONTROVERSY AS TO THE EXACT CONVERSATION THAT PhRMA Intern HAD WITH “MYSTERIOUS MR. X” AND EXACTLY WHAT OFFER PhRMA Intern MADE TO THIS “FRIEND” OF KEN JOHNSON, BUT SOON AFTER HIS MEETING WITH THE PERSUASIVE INTERN, MR. X MADE A FRANTIC CALL TO KEN JOHNSON… 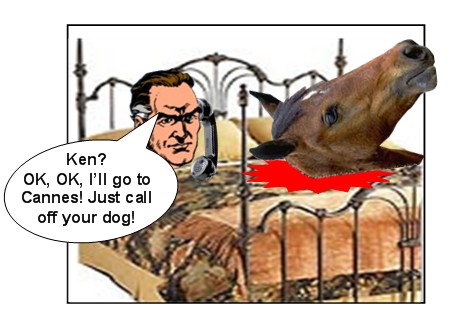 NO, MR. X! THAT WAS NO DOG! THAT WAS PhRMA Intern! FIGHTING A NEVER-ENDING BATTLE FOR JUSTICE FOR THE PHARMACEUTICAL INDUSTRY!

Thus ends the latest episode of the Adventures of PhRMA Intern!

Will the identity of the MYSTERIOUS MR. X, powerful Hollywood movie mogul, ever be revealed? Will PhRMA Intern be called to testify before Congress and reveal his identity? Or will PhRMA Intern quietly fade away into her boring everyday job at PhRMA disguised as mild-mannered Emily Jameson, never to be heard from again?

Images of PhRMA Intern, while not explicitly supplied by PhRMA, are used in compliance with PhRMA’s “Terms and Conditions for Use of Images,” and, in particular this condition: “These images may not be used to endorse a particular service, brand, commercial entity, political organization or individual and are designed to facilitate use by the print and broadcast media in an editorial or illustrative capacity in accordance with U.S. law governing such use.”