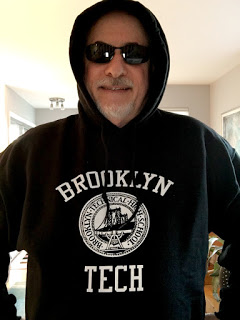 Back in December, 2015, year I suggested that the pharmaceutical industry put some distance between it a “Pharma Bro” Martin Shkreli. I said (here):

“Frankly, I’m getting tired of it all. Shkreli had his 15 minutes of fame. Let’s move on. It’s time for the pharma industry to get its 15 minutes of fame by doing something substantial to distance itself from the likes of Shrkreli.”

But, I added a caveat:

“The mainstream drug industry cannot distance itself from ‘wolves’ like Shkreli merely through better corporate communications.”

Unfortunately, the drug industry (aka The Pharmaceutical Research and Manufacturers of America aka PhRMA) did not listen to me and unleashed a TV ad that “cast Shkreli as a scoundrel in a hoodie who does not represent an industry of angels wearing white lab coats” (read “PhRMA Pissed That They Get No Respect, Lashes Out at Martin Shkreli, Gets Less Respect in Return!”).

Yep, they should have listened to this guy in a hoodie – I just received my Brooklyn Tech hoodie in the mail. I’m proud to wear it too! I put the dark glasses on just to mess with you.

Any way, read on to learn more about what I recommended and view PhRMA’s unfortunate TV ad that aside from casting some guy in a hoodie as a scoundrel also paints a dark image of medical researchers (keep an eye out for the dark image of a scientist peering through a microscope).

Actions are needed such as ending exploiting loopholes in the orphan drug act. Read, for example, “Otsuka [a PhRMA member company] to FDA: No Thanks… Orphan Status for Abilify is More Profitable. Generics Can Pound Sand!” [Would you believe that Crestor is an “orphan” drug? See here].

But unless pharma puts the brakes on ever-increasing drug price hikes (see here and here), Shkreli will be the industry’s poster boy.

PhRMA PR Goes Poetic and Darkly, Not Gently Into the Post-Obama Night