“We are pleased the GAO appropriately took into account the facts about how the biopharmaceutical marketplace works in its analysis of prescription medicine pricing trends,” said PhRMA CEO John J. Castellani in his organization’s Statement Regarding GAO Report. “The [GAO] report’s key finding shows prices have been increasing at a rate of 2.6% [my emphasis] annually, which is lower than overall medical inflation,” said Castellani.

Castellani focused exclusively on the GAO analysis of one “basket” (basket #4) of drugs that was “based on the active ingredient rather than drug name…in order to account for the growing national shift in consumer utilization from brand-name to generic versions of drugs.” In other words, the basket included generic and brand name drugs. For example, “Zocor/10mg/oral/tablet” and “simvastatin/10mg/oral/tablet” would be considered the same drug for purposes of this fourth basket because they are the brand-name and generic versions of drugs with the same active ingredient, even though they have different names.

Of course, PhRMA does not represent the generic drug industry, so you can forgive Castellani for not mentioning the REAL “key findings” of the GAO report; ie, between Q12009 and Q12010, brand name drugs increased in price by 7.1% whereas generic drug prices decreased by 1.5% (see chart below, which also includes data from Barclays Capital): 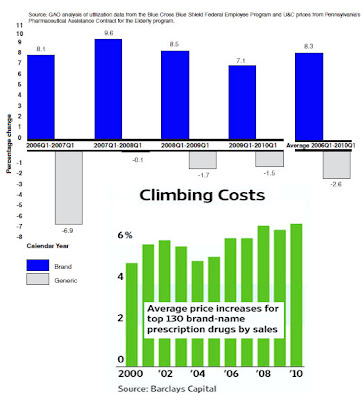 One other problem with PhRMA’s statement is this: The 2.6% price increase cited by Castellani is the AVERAGE increase in price between 2006 and 2010. That, indeed, is LESS than the 3.8 percent average annual increase in the consumer price index (CPI) for all medical goods and services — which INCLUDES drugs — during the same period. Looking only at 2009-2010 GAO data, however, the price increase was 4.3%. In comparison, the CPI for “Medical care services,” which EXCLUDES drugs, rose 3.0% for the 12 months ending January, 2011, according to this Bureau of Labor Statistics press release.

Whether or not drug price increases are greater or lesser than general medical costs is a moot point. Why doesn’t the industry share some of the pain many people are feeling during this harsh economy and DECREASE the price of its products as did the generic drug industry? Yeah, like that would happen!