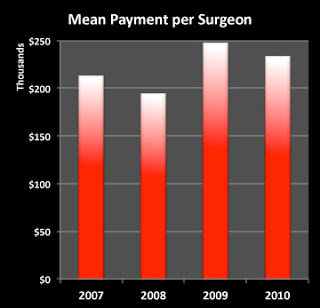 File this under Pharmaguy’s Believe It or Not! An analysis of financial payments made by orthopedic device manufacturers to orthopedic surgeons — published today in the Archives of Internal Medicine (Arch Intern Med. 2011;171[19]:1759-1765) — documents that if these payments were evenly distributed to all 25,000 surgeons, each surgeon would have received $9,120! This dwarfs the $750 per US physician that the drug industry pays to physicians every year (see “Physician Bailout: On Average, Pharma Pays Every US Physician Over $750 Per Year“).

Of course, not every orthopedic surgeon receives money from the 5 largest orthopedic implant makers responsible for approximately 95% of all knee and hip implants used in the United States. (FYI: the 5 are Biomet Orthopedics, DePuy Orthopaedics, Smith & Nephew, Stryker Orthopaedics, and Zimmer.) In 2008, only 526 orthopedic surgeons received a total of more than $228 million (including $109 million in royalty payouts). On average, each of THESE surgeons received $433,460!

NOTE: 2008 may have been an unusual year due to royalty payouts. In 2007, 939 orthopedic surgeons received more than $198 million, which works out to $210, 863 on average per surgeon. Also, these figures do NOT include remuneration for meals and travel. Most payments are for consulting, royalties, and “research.”

[In comparison, drug companies paid, on average, $1,520 to each physician that received payments, which DO incude meals and travel expenses.]

The authors were able to study payment trends for 3 of the 5 companies — DuPuy, Smith & Nephew, Stryker — over a 4-year period from 2007 through 2010. The mean payments per surgeon are plotted in the following chart.

The authors note that the average surgeon’s salary is between $370,000 and $525,000 and they calculate that these payments by device companies would “likely represent 25% or more of an average orthopedic surgeon’s annual income.”

The 939 surgeons paid big bucks by device companies in 2008 represents only about 4% of the 25,000 orthopedic surgeons in the US. In comparison, drug companies made payments of some kind (including meals and travel reimbursement) to approximately 50% of ALL US physicians.

Apparently, device manufacturers are more selective than are drug companies regarding the physicians who receive payments. At least 44% of surgeons receiving money from device makers had an academic affiliation. The study’s authors suggest that device makers may “curry relationships” with academic surgeons because they have the “potential to influence the future implant choices of all residents passing through a given program.” Other critics have noted that high-volume surgeons also receive large consulting payments from device companies.

In a commentary published along with the study cited above, Robert Steinbrook, MD, of the Yale School of Medicine, noted that the term “consulting” is ambiguous. “Consulting related to research and development differs from consulting related to sales or marketing, and payments for consulting differ
from research support or royalties. Consulting should be explicitly defined, and different types should be reported separately.”


Meanwhile, CMS has yet to specify in regulations exactly how payments are to be classified when it comes time for ALL drug and device companies to report these payments to the federal government as required by the Patient Protection and Affordable Care Act (payments for 2012 must be reported by March 2013 and HHS will make these data public in September 2013).