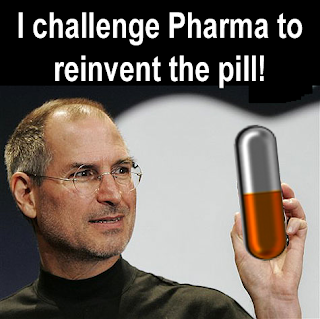 There’s a lot of buzz about pharma’s current lack of innovative new products in the “pipeline” and what needs to be done about it.

“Innovation” itself is such a buzz word these days that AstraZeneca decided to sponsor an international “Innovation Survey” to find out “it means to different people and how valuable they thought it was to society” (see here).

When drug executives talk about innovation, they often use phrases like “drive value for our stakeholders and our business” as the focus of innovation.

Who are pharma’s “stakeholders” and what drives value for business? Mostly investors.

Today, more than ever, pharmaceutical companies are fixated on profits and have lost the vision of the founder of Merck (George Merck) who said “We try to remember that medicine is for the patient. We try never to forget that medicine is for the people. It is not for the profits. The profits follow, and if we have remembered that, they will never fail to appear. The better we have remembered that, the larger they have been.”

That sentiment sounds a lot like what Steve Jobs believed. Regarding how he turned Apple around after 1996, Jobs said “My passion has been to build an enduring company where people were motivated to make great products. The products, not the profits, were the motivation. Sculley [who replaced Steve Jobs as Apple’s CEO for a short time] flipped these priorities to where the goal was to make money. It’s a subtle difference, but it ends up meaning everything” (see “Steve Jobs Solved the Innovator’s Dilemma“).

The book Innovator’s Dilemma by Clay Christensen was on Jobs’ reading list. What’s interesting to James Allworth, Fellow at the Forum for Growth and Innovation at Harvard Business School, is that Jobs “solved the conundrum.” Aliworth noted that the causal mechanism at the heart of the Innovator’s Dilemma is the pursuit of profit. “The best professional managers — doing all the right things and following all the best advice — lead their companies all the way to the top of their markets in that pursuit… only to fall straight off the edge of a cliff after getting there,” says Aliworth. By flipping Apple’s priorities away from profit and back to great products, Jobs took Apple from three months away from bankruptcy, to one of the most valuable and influential companies in the world.

I’m finding a lot of writings about Steve Jobs, whose management style and vision are being studied and applied to other industries. Here are some examples related to the pharmaceutical sector:

Adapting the learnings from Steve Jobs’ career to the pharmaceutical industry may even be a “hot” enough topic to warrant at least a Pharma Marketing Talk podcast discussion or a Twitter chat. Who knows, it may even be worthy of a full industry conference! What do you think?

What the US FDA Could Learn from China’s FDA