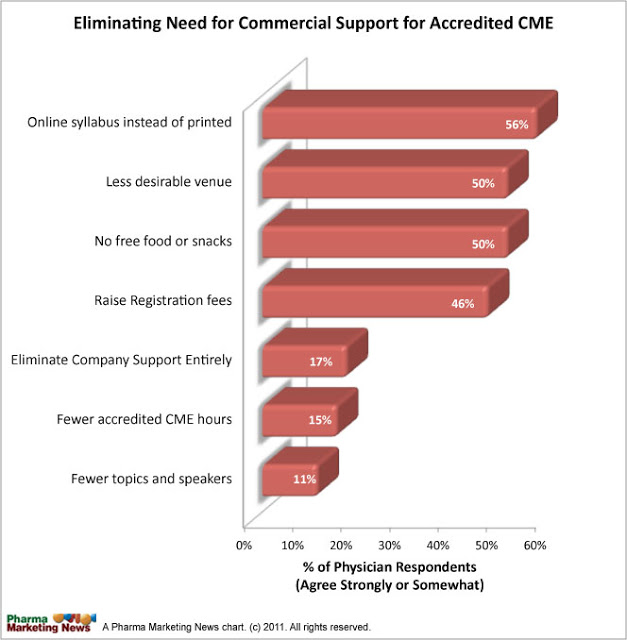 Talk about having your cake and eating it too! Commercial funding of continuing medical education (CME) and the potential for bias appear to concern many physicians, yet only a TINY MINORITY (7%) are willing to pay registration fees to eliminate or offset commercial funding sources, according to a report in the May 9 issue of Archives of Internal Medicine, one of the JAMA/Archives journals.

Maybe physicians would like ObamaCME; ie, government subsidy of their education?

No, not quite. But they are willing to give up certain things to reduce costs such as eliminating a printed syllabus. They are not, however, keen to give up the free coffee and snacks!

The authors surveyed attendees at live CME courses delivered by the International AIDS Society–USA (IAS-USA), a nonprofit organization that pools the support it receives from industry so that no one company funds any particular program. In total, 770 attendees (a 57% response rate) completed the 22-item survey, which focused on beliefs about commercial funding and potential for bias, willingness to offset the cost of commercial support, knowledge about the costs of producing CME programs, and demographic information.

Although the study surveyed nurses, nurse practitioners, physician assistants, and persons with Ph.D.s or other academic degrees as well as physicians, I’ll just focus on the responses from physicians (N = 378).

Potential for Bias
Although he authors never specifically define what they mean by “bias,” I think we all know they are referring to influence over the content of CME courses in such a way as to benefit the commercial supporter.

There are several opportunities for bias to creep into CME, all of which involve money from drug and device companies:

Of course, some CME programs are not funded in any way by the drug industry and is paid for entirely  from registration fees paid by physicians (the Institute of Medicine estimates that physicians, on average, spent slightly more than $1400 per year for CME in 2007).

The survey asked physicians how they would rate the bias of CME programs under each of these scenarios. The results are presented in the chart below: 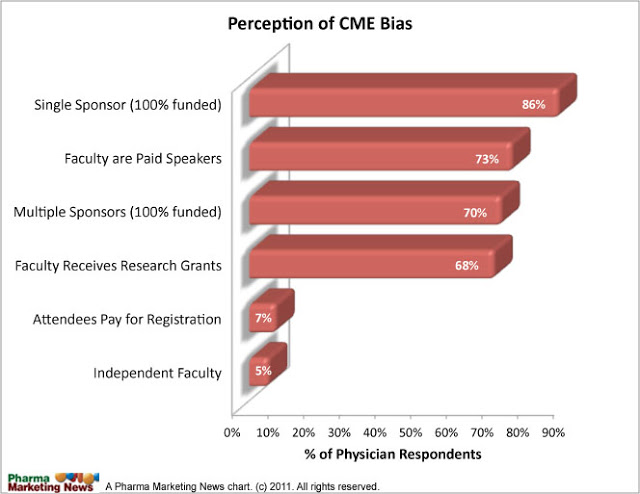 This chart shows the percentage of physician respondents who believe the listed CME funding options have a moderate or large potential for bias.

According to the respondents to this survey, the least potential for bias in CME is when the faculty is completely independent; ie, receives NO funding of any sort from the drug/device industry. However, that is an unlikely scenario given the fact that perhaps 80% of the CME faculty pool receives some form of funding from pharma/medical device companies.

“Speakers will continue to have relationships with industry in various ways, especially for research funding,” noted authors of a commentary that was published in the same journal as the report. “Bias will always need to be addressed through speaker disclosures and direct monitoring for bias at CME events.”

Given that so many physicians feel that pharma support of CME introduces bias, you would think they would want to eliminate that support. Actually, only 17% of physicians surveyed agreed strongly or somewhat that commercial support of CME should be eliminated entirely (see chart below) and 56% agree that “Pharmaceutical/medical device company support is essential for accredited CME and should not be eliminated” (data not included in following chart).

Physicians were asked what they would be willing to do to “eliminate the need for pharmaceutical/medical device company support” of CME activities they attended. The choices are shown in the list in the above chart.

Only 50% of physicians would give up free food or snacks to eliminate the need for commercial support of CME. BTW, these costs are substantial. Hotels — where most live CME programs are held — charge as much as $8.47 for a cup of coffee! “A $9 cup of coffee may not seem to be the most economical use of CME dollars,” noted the authors of the study.

It’s the Internet Age, Stupid!
Reducing the cost of CME seems to be the best way to eliminate the need for commercial support.

“Barring a substantial reduction in the cost of delivering CME, however, a rapid reduction or elimination of funding might be unacceptably disruptive, and some have postulated that such a change will result in the disappearance of live CME as we know it…” said the authors.

What better way to reduce costs than by delivering CME via the Internet? The survey did NOT ask if physicians would participate ONLY in online CME programs if that meant eliminating the need for commercial support. In fact, more and more physicians are receiving CME credit online (see “Pharma Support for Accredited CME Continues to Decline“).

Yes, delivering CME via the Internet would “result in the disappearance of live CME as we know it,” but that’s a good thing, not a bad thing, given the exobitant costs and biases in the CME as we now know it, IMHO.