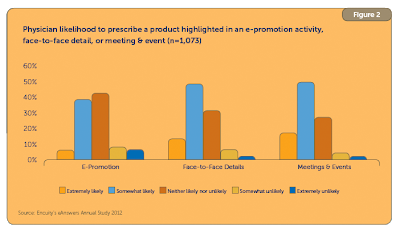 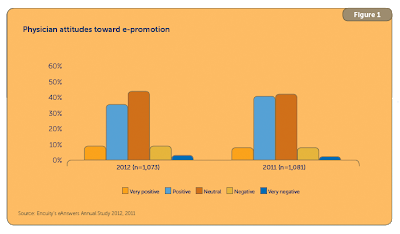 Why the colder shoulder despite the fact that the industry has been scaling back on their field forces in recent years while simultaneously increasing investment in e-promotion? Perhaps there has been TOO MUCH e-promotion. According to a cegedim Strategic Data report published in February 2012, e-detailing has “risen steadily since 2009 both in net details and in the proportion of online details to total details. The total number of e-details grew by almost 50 percent in 2011 and by over 80 percent the previous year” (see chart below).

Encuity notes that younger physicians have a “more positive view” of e-promotion and that may suggest that pharma is “ahead of the curve.” Ha! That’s the first time I’ve heard of pharma being ahead of a technology curve! It’s more likely that younger physicians have not reached the saturation point, are not as busy as older physicians, or feel the need to absorb more information from whatever source. In addition, the proportion of “younger” physicians must be increasing as the baby boom physicians retire. If so, I would have expected an uptick in e-promotion approval, not a “downtick.”