Pharma companies have long ago mastered the art and science of “Precision Marketing” to physicians. No where has this prowess been demonstrated more conclusively than in a recent analysis of internal industry documents reported in the August 15, 2006 issue of the Annals of Internal Medicine (see “Narrative Review: The Promotion of Gabapentin: An Analysis of Internal Industry Documents“). You can also read summaries of this analysis published by NBC News.

What is Precision Marketing?
It’s not a term that I invented. Here’s a definition I found in a white paper: “optimizing customer profitability by delivering the right messages, to the right individual customers or market subsegments, through the right channels, and at the right points in time.”

Precision marketing is usually a term heard in direct-mail marketing and customer relationship management (CRM) circles. However, I would like to use it in relation to Buzz Marketing and examine how it is applied by pharmaceutical marketers to “optimize” the profitability of its physician and patient customers.

I will refer to the AIM paper as well as industry documents stored in the Drug Industry Document Archive at the University of California, San Francisco.

[The Drug Industry Document Archive (DIDA) houses about 1000 documents drawn primarily from United States ex. rel. David Franklin vs. Parke-Davis, Division of Warner-Lambert Company (now owned by Pfizer, Inc). The litigation concerned the marketing of Neurontin (gabapentin). DIDA also contains documents on the marketing of Vioxx (rofecoxib) from the public records of the Minority Office of the Congressional Committee on Government Reform. The documents in this Archive focus primarily on the marketing of Neurontin (gabapentin) and Vioxx (rofecoxib), and include internal documents from Parke-Davis, Merck & Co. and correspondence with outside physicians and organizations, such as medical education and communications companies and advertising firms. Also included are regulatory and legal documents, court filings and depositions.]

One of these documents (Exhibit 144: Northeast CBU 1997 Situation Analysis, 05/31/96), from Parke-Davis (now Pfizer), talks about “precision marketing opportunities” in the northeast physician market, which described as “very conservative.” According to this document PD also employed “Precision Marketing Managers.”

The document also talks about the use of the off-label uses of Neurontin for pain and psychiatric disorders:

Neurontin usage in chronic pain has been graining (sic) tremendous ground over the past six months. The continued “noise” [my emphasis] regarding pain will undoubtedly have significant impact through the coming year. The Northeast has a high percentage of psychiatrists and provides tremendous potential for use in bipolar disorders.

Let’s focus on the impact that “noise” had on off-label use of Neurontin for pain in 1996, the year when this document was written. The chart below is instructive. I copied it from the AIM article and added the two “A” and “B” markers. These markers indicate where I believe the “tipping points” for the off-label use of Neurontin for pain and psychiatric disorders, respectively, occur. 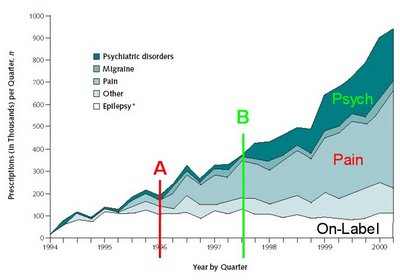 In the book “The Tipping Point” by Malcolm Gladwell — who is an author well-read by the pharmaceutical industry — the author talks of the tipping point as the “moment of critical mass, the threshold, the boiling point” when an idea, fashion, or product takes off. In this case, we are talking about the tipping points for off-label uses of Neurontin.

My point is that pharmaceutical companies have mastered the techniques that produce these tipping points in prescribing by physicians. It’s all about “buzz” or “noise”, or as Gladwell would say, contagiousness. It’s also about little causes that have big effects — another characteristic of “tipping point marketing.” It’s not the individual gifts of free pens and mugs that cause doctors to prescribe according to the drug company plan, but the combination of that with all the other little precision marketing techniques employed by the industry.

Look at 1996 in the chart ( see “A”). That’s when physicians started writing a lot more scripts for Neurontin off-label to treat pain. This tipping point was engineered by the combination of the following techniques — most, but not all, legal and acceptable at the time — that are outlined in Exhibit 144:

These techniques have all the hallmarks of buzz marketing: use of “peer-to-peer” selling, absence of a clear demarcation between promotion and non-promotion, and manipulation of personal communications between physicians to insert product messages (read the AIM article for details).

It’s expensive to carry out Precision Buzz Marketing. According to reliable estimates cited in the NBC article, the drug industry spends $18.5 billion each year on promotion to doctors — “that’s about $30,000 a year for every physician in the U.S.”

What About Consumers?
It’s often said that pharmaceutical companies don’t do a good job with precision marketing to consumers. Frankly, they may not be able to afford it! The industry spends about $4 billion each year promoting drugs directly to consumers — that’s about $18 per adult in the U.S. No way that you can ever sustain a Precision Buzz Marketing initiative for consumers on that budget. Not even the pharmaceutical industry can afford to spend $30,000 per U.S. adult!

There is another way: focus on the true customers among consumers — the patients who are taking the drugs. This is a much smaller group. As with physician-focused marketing, pharma companies can also measure how effective patient-focused campaigns are — through patient-level prescribing data, which is an emerging field of market research (see “Patient-Level Data: A New Level of Analysis“).

Consultants to the drug industry already are pushing their clients into the realm of buzz marketing to patients (see “Buzz ‘n Blogs — Stealth Marketing” and “Rules of Engagement“).

Some of the same techniques used in “word-of-both” precision buzz marketing to physicians can be used with patients. However, to make it scalable and cost-effective, this has to been done almost exclusively electronically via the Internet, iPods, and cell phones.

First, you have to identify the equivalent to “high prescribers” among patients. These people would fit Gladwell’s profile of Mavens: their motivation is to educate and help. They can be found in the “consumer-generated content” watering holes online, such as patient forums and blogs.

Then you have to “shadow” them — sit in on their conversations online much like sales reps sit in on patient-physician consultations in preceptorships.

You will also have to recruit patients for “peer-to-peer” selling. Pay them like physicians are paid (but much, much less).

You will need a patient equivalent to medical science liaisons who are used on the physician side to maintain relationships. These people will fit Gladwell’s profile of “Connectors” — those people who “know lots of people.”

I can go down the list of techniques used for physicians and show how they can also be applied to patients and how the drug industry can tip patient behavior as well as physician behavior, but I will leave that up to your imagination and comments to this post.