According to a recent story in BrandWeek, “The Washington Legal Foundation, a conservative think tank, filed a petition with the Food and Drug Administration Monday [August 7, 2006], challenging the FDA’s right to send warning letters to drug companies whose advertising it finds misleading.” (See “Conservative Think Tank Takes On FDA Over Drug Ads“.)

However, the challenge is really being made against FDA’s rules requiring that direct-to-consumer (DTC) ads include “fair balance” — ie, statements about major risks along with the benefit statements — in the creative part of the ads. 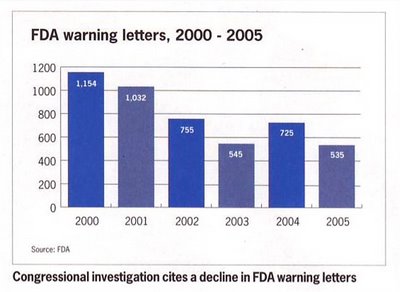 The WLF, however, focuses on the legality of FDA to issue “warning” and “untitled” letters, which warn drug manufacturers of problems with ads and suggest corrective actions. If they can win the legal point, they can achieve their real goal: allowing DTC ads without risk information.

The WLF attacks FDA use of warning letters although the number of such letters has declined in recent years (ie, since Bush took office) despite the Vioxx adverse event scandal (see Figure on right).

Besides, warning letters are hardly a concern for pharmaceutical marketers. Paraphrasing a comment I heard once at an industry conference, “a product manager with an FDA warning letter framed and hanging on the office wall has bragging rights.”

All this just confirms that the warning letter issue is a “straw man” that WLF has set up to divert focus from its real mission of freeing drug advertisers from the need to include any risk information at all within the “creative” body of drug ads.

The WLF petition (“Citizen Petition Regarding Review of Policies and Practices of DDMAC and OCBQ to Ensure Compliance with First Amendment and Statutory Mandate”) also tackles the risk information requirement directly stating that it represents a “double disclosure” policy for risk information.

WLF says: “DDMAC and OCBQ also have established a policy of requiring drug manufacturers to include duplicative risk information in printed promotional materials, such as scientific journal advertisements aimed at health care practitioners. Under this policy, manufacturers are required to communicate publicly about their products in ways that overemphasize the risks of drug use and underemphasize their benefits.”

We’ve seen this argument before in another “citizen’s” petition issued by the Coalition for Healthcare Communication (CHC) back in March (see “DTC without the Risk“). In many ways, CHC and WLF are fellow travelers and often share the dais at industry meetings chipping away at this issue.

Here’s an example of what the WLF is complaining about: 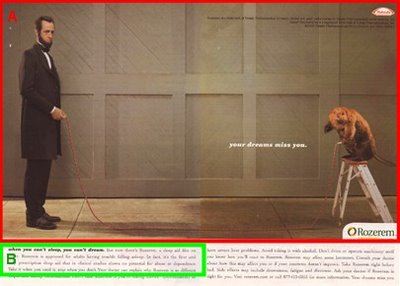 This ad for Rozerem, a sleep aid drug, shows how much space some print drug ads allocate to imagery (usually conveying a positive benefit message), shown here outlined in red (“A”), and text statements about benefits (shown outlined in green, labeled “B”) and risks (all the other text). In this ad, about 85% of the creative space is used up by the wacky image, 5% is devoted to the benefit statement, 8% to the fair balance statement, and 1% to the brand logo. If you consider the imagery as part of the benefit statement, then the ratio of fair balance information to benefit information in this ad is 10%. That is, only 10% of the creative space in this ad is devoted to risk information!

Admittedly, the Rozerem ad is unusual. An analysis I have done of over 60 print ads, however, shows that, on average, only 19% of the creative space in print drug ads is used to present so-called “duplicative” risk information. The average for the benefit statement is 20% (not counting the image area, which accounts for an average of 47% of the creative ad space). Together, the image area and benefit text area occupy 67% of the creative ad space. This is over 3 times the space allocated to risk information. Hardly evidence for overcommunicating risk and undercommunicating benefits in print drug ads!

WLF Says Duplicative, I Say Whaaaa?
What’s up with WLF’s claim that even this small amount of risk information is “duplicative?”

What WLF means is that every Rx drug ad must also include the approved labeling (aka, package insert or PI) or summary of the drug label. This is usually included on the page following the creative part of the ad (on the reverse side of the page to be exact). WLF thinks that is enough to convey risk information. Note: The PI also contains benefit information, but you don’t hear the WLF complaining about “duplicative” benefit information!

The WLF focuses mainly on print drug ads aimed at physicians and suggests that physicians can read the PI and get all the risk information they need. Therefore, the requirement to summarize the main risks in the creative part of the ad is “duplicative.” [Using this logic, why not just present the PI as the complete ad?]

Sounds reasonable. However, the FDA rules make no distinction between ads aimed at physicians and those aimed at consumers. A legal maneuver to eliminate risk in one, therefore, would also remove risk in the other. We all know that consumers do not read the PI behind the creative ad page. If they did, not many would know where to find the risk information in the PI let alone understand it once they did find it (see “Future of Drug Print Ads“).

WLF also makes a first amendment case against FDA
FDA requires — in some cases — offending companies to publish “corrective” advertising and “cites advertisers for using studies it has not reviewed without taking into account that those studies may be accurate or appropriate.” WLF insists that the FDA “undertake a comprehensive, systematic review of their … policies and practices relating to prescription drug advertising and promotional labeling for consistency with their statutory authorities and with the First Amendment. WLF requests, further, that appropriate proceedings (e.g., rulemaking, guidance development, withdrawal of draft guidances) be initiated to implement the results of that review.”

The FDA is reacting to the WLF and similar petitions — indeed, it is legally required to do so. As indicated by the WLF: “Four years ago, FDA issued a Request for Comment on First Amendment Issues, in an effort to ensure that its regulations, guidances, policies, and practices continue to comply with the governing First Amendment caselaw.” That may have been in response to previous petitions of the WLF, which has a bee in its bonnet about this issue and frequently tilts at the FDA wind mill.

Sometimes — as in the Plan B case — the FDA initiates a comment period as a delaying tactic. This has not gone unnoticed by the WLF, which claims that “Despite receiving 173 comments from interested persons, FDA has not yet systematically reviewed its policies and practices.”

Industry Studies Ads Without Risk Info
Meanwhile, drug companies like Merck are performing “DTC risk-recall” research with technical assistance from FDA’s DDMAC according to an article in the August 2006 issue of MM&M (“Merck taps DDB, Ogilvy for DTC risk-recall research”). This is a bit like the fox guarding the henhouse, especially when ad agencies are involved!

But what’s really scary about this research, which will show TV ads with differing levels of risk information to consumer panels, is that it specifically includes an ad “stripped of all risk information, scanned like an ad for an OTC product.”

This is merely a “control,” says Merck. But the data will be there for groups like the WLF to further make its case against risk information in DTC ads and for the FDA to make its decision without caving in to WLF on the warning letter issue. It’s all good as far as the WLF is concerned!