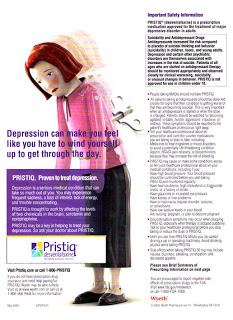 Almost one-half of Wyeth’s new Pristiq print DTC ad creative, which I cut out from this week’s Newsweek magazine (see left), is devoted to presenting risk information, including a black box warning about suicide risk that FDA now requires for all antidepressant drugs (see here).

The TV ad debuted last night during the depressing show Earth 2100 on ABC (see here). I would estimate that 30 seconds of the 60-second TV ad is also devoted to presenting risk information (find the TV ad on the Pristiq website here).

Now I could write about the wind-up doll analogy, but that would just be a cheap shot. Like, whoever remembers such antiques?

According to a confidential inside source, the wind-up doll signifies what many people on depression feel like: they must go through their daily lives on “autopilot,” and at times, do not even “feel human.” The wind-up doll simulates the impact of depression on daily functioning — particularly feelings of sadness, loss of interest in favorite activities, trouble concentrating and lack of energy. OK, I’ll buy that.

I’m more interested in the fact that despite the dire warnings required, Wyeth decided to do a DTC campaign at all! A black box warning in the past spelled the death knell for DTC advertising. Literally half of the Pristiq TV media spend is going towards risk communication!

If the risk segment of the ad were creatively done to make the risks (including death) sound reasonable (as in recent Celebrex TV ads), then I would say the money was well spent. However, the Pristiq TV ad uses a conventional voiceover technique citing a laundry list of bad things that can happen to you. While the voice drones on, the video shows the patient enjoying a nice, happy, family outing. Also, the music is more lively during the voiceover.

Which makes me think: Did this ad pass muster with the FDA? I only ask that question because of the recent publication of FDA’s draft “Guidance for Industry on Presenting Risk Information in Prescription Drug and Medical Device Promotion” (see “Communicating Risk in Online Drug Ads: Reading the Tea Leaves in Recent FDA Draft Guidance“).

I worry that the Wyeth marketing people did not read this FDA document carefully (actually, I’m sure the ad was created long before the document was released). I draw their attention to Example 20 on page 20 of the FDA draft Guidance:

“Example 20: A video or broadcast ad depicts a joyous or exhilarating moment, contains images of people enjoying the benefits of the product, or includes otherwise compelling or distracting non risk related images while major risks are communicated in a voiceover. The inconsistent tone or images may be too distracting for the audience to listen to or process the risks, causing the video or broadcast ad to communicate a false or misleading net impression of the product.”

This describes exactly the Pristiq technique of presenting risk information and I must admit that I did not absorb it all as I was looking at all the nice people and listening to the soothing music.

I’m sure the FDA will send Wyeth a letter about this, probably next year around this time. So, you better look out Wyeth! The bad FDA has you in its sights!

This is an interesting case not just because of the way risk information is presented in the TV ad, but because there is a campaign going on to eliminate the requirement for a suicide black box warning for anti-depressants not intended for children (Pristiq is indicated only for use in adults). As I wrote about a few days ago, some mental health professionals think the FDA should change its policy regarding the safety of antidepressants (see “Unintended Consequences of FDA Warnings: Lilly-funded Antidepressant Case Study“).

Again, given how long it takes the FDA to enforce or change regulations, I don’t expect Pristiq to benefit from the anti-black box campaign any time soon. Wyeth, however, should modify how the risk information is presented in light of the draft guidance, IMHO.

Comments from Wyeth were not available at the time of publication of this post, but I hope to speak with a representative later today and report back.

Meanwhile, here are some comments about the Pristiq TV ad gleaned from Twitter:

“Is the best ad campaign platform for Pristiq–an antidepressant drug–really a homely woman staring blankly at an expressionless doll?” @TheNapkin

“OH on prescription anti-depressant commercial: “Pristiq is THOUGHT to work by…” What? You mean you don’t know?! Frightening.” @luna_x

“interesting, seeing a commercial for pristiq & they just said that “it’s thought that pristiq works by…” shouldn’t they know how it works?” @lbbinc

“Hey Pristiq – what’s the point of being an anti-depressant if your side effects increase suicidal thoughts? …seriously, I’m asking!” @Matticus44

“Ahhhh Pristiq commercial. Guess I’ll go on that tomorrow since I’ll be so depressed after this show, ha #Earth2100” @prettyannoyed

Was a Rat Harmed in the Filming of This Pfizer Commercial?