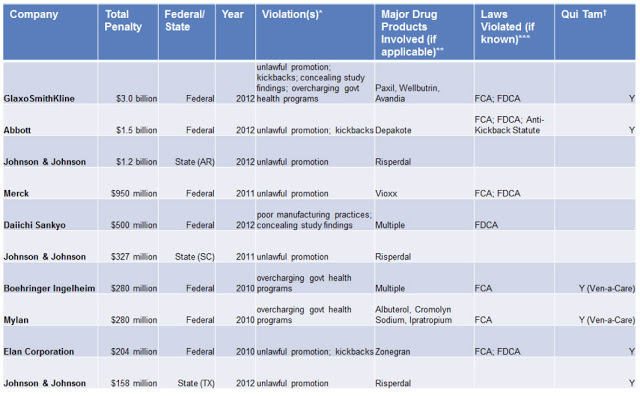 Public Citizen, the citizen “watch dog” group, has documented all major financial settlements and court judgments between pharmaceutical manufacturers and the federal and state governments since 1991. Its latest report (here) covers the time frame from its last report (November 2, 2010) through July 18, 2012. According to this latest report:

“A total of 74 additional settlements, totaling $10.2 billion in financial penalties, were reached between the federal and state governments and pharmaceutical manufacturers between November 2, 2010 and July 18, 2012, with the first half of 2012 alone already representing a record year for both federal ($5.0 billion) and state ($1.6 billion) financial recoveries. Since 1991, a total of 239 settlements, for $30.2 billion, have now been reached (through July 18, 2012) between federal and state governments and pharmaceutical companies.”

The following chart shows the yearly trend since 1991: 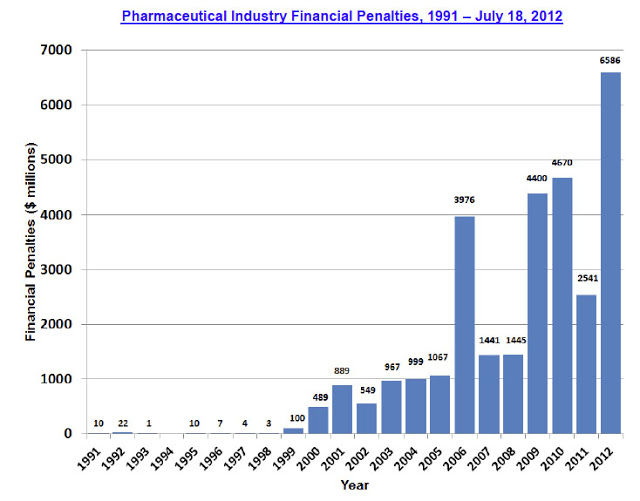 These data include Federal and State settlements. Between November 2, 2010 and July 18, 2012, state settlements were $2.5 billion vs. Federal settlements totaling $7.7 billion. “2012 already represents a record year for state financial recoveries,” says Public Citizen,  which notes that this 2012 state windfall was “largely due to a single court judgment in Arkansas in 2012 that required Johnson & Johnson to pay the state $1.2 billion for the unlawful promotion of the antipsychotic Risperdal. To our knowledge, as of the publication of this report, the company has not yet paid the fine and plans to appeal the judgment.” Hopefully, JNJ will eventually pay up and help AK balance its budget and then some!

I created the following pie chart showing which types of penalties were responsible for generating these massive Federal and State settlement amounts: 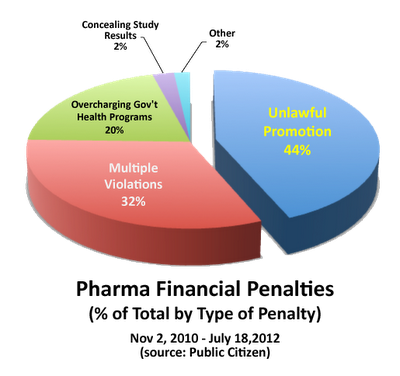 “Unlawful Promotion” — off-label and other “deceptive” marketing practices — represents largest slice of the pie. This is probably a low estimate because the category “multiple violations” must also include unlawful marketing violations. If only 25% of these were marketing related, then “Unlawful Promotion” would account for the MAJORITY of settlement fees.

Congrats to GSK for being at the top of the list!

One other piece of information I found interesting is that “qui tam” cases involving “whistle blowers” account for the vast majority of the financial settlements in recent years. In terms of percent of the settlement dollar amount, here’s how it looks for the past few years:

Whistle blower cases in 2011 didn’t result in big financial settlements; consequently, 2011 was a “down” year overall.