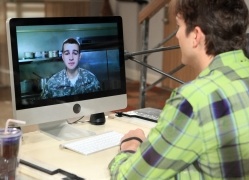 South by Southwest (#SXSW) is in full swing in Austin, TX. The conference organizers wouldn’t give me a comp press pass, so I am following the health track from afar via Twitter using the #sxswh hash tag.

There’s seems to be a lot of talk right now at SXSW about the “Quantified Self” as mentioned by NPR (here): “Technology has made it easier than ever to track your activity levels, your sleep cycles, how you spend your time, and more. The self-trackers who near-obsessively capture and analyze their own data are part of a growing ‘Quantified Self” movement. Self-tracker Peter Zandan, an executive at Hill+Knowlton Strategies headed up a panel on Quantified Self this year at SXSW.”

“Interested in giving self-tracking a try?”, asked NPR. Yes, I am, but only because I received an UP bracelet by Jawbone as a Christmas present. UP is “a uniquely trendy wrist-worn pedometer” that communicates with my iPhone. It resembles a black Livestrong-style bracelet except that it is an ugly black thing: 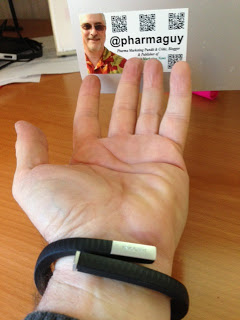 I’ve been wearing this thing now for a few weeks because I think it’s cool — I believe billionaire Walden Schmidt on Two and a Half Men wears one (see his left wrist).

But then I read this comment from “Eric Larson” on the NPR site:

“Self-examination and self-awareness via all this tech-driven tracking are great at some level, but not too useful unless they are linked with motivation to change whatever behaviors are problematic or reinforce those that are healthy. Otherwise they’re a sign of self-focused narcissism if one fixates and gloats over the results, or self-flagellating low self-esteem for failing to meet whatever standards one is using. Either way, it’s pretty self-absorbed to be tracking all that data without a clear purpose, and a surrender to technology for technology’s sake. Just sayin'”

I think that’s a pretty good assessment of the “Quantified-Self” movement. The movement could capitalize on “self-focused narcissism” by designing better looking gizmos. For example, how would Steve Jobs redesign my UP thingee? Maybe the Apple “Watch” will break new ground here because I keep glancing down at my UP on my left wrist expecting to see the time!

Big Inside Joke About Doctor Surveys: 90% of Physicians Believe They...