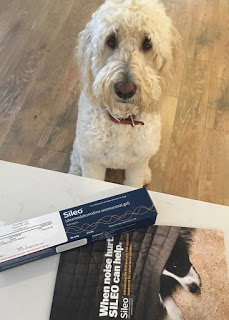 Social media and patient stories are a “match made in heaven” and several pharma marketers are using social media to listen to REAL patient stories and to leverage those stories to help motivate other patients. This is as true for dogs as it is for humans as evidenced by Chase’s story (see him on the left).

Before I get to that, some background.

It is estimated that one-third of dogs in the U.S. suffer from noise aversion and they especially hate the Fourth of July with all its fireworks, firecrackers, rockets and other noise makers. That “unmet medical need” was met by Sileo, an FDA-approved canine prescription drug developed by Zoetis. Sileo treats noise-averse dogs without sedating them.

Luckily for Chase, Sileo was approved just in time. Here’s his story as translated by Google Translate.

“Every 7 years [i.e., every 1 human year] on July 4 I had to hide under my master’s couch all day and night as the rockets blasted all around me! I could yowl all I wanted but could get no relief.

“Woof! Woof! I screamed at my master! Do something, I pleaded. But he just turned those sad human eyes at me and made unintelligible noises. I was so beside myself that I would try and bite him when he petted me (ugh! I hate when humans do that!).

According to this FiercePharma story, Zoetis prepared its veterinarian customers and internal communications pros to respond quickly to social media where dog owners were already sharing stories about their noise-anxious dogs.

But real stories posted to social media by real dogs really tipped the scales and sent sales of Sileo skyrocketing as it were.

“One day,” noted Chase in his story, “I read a tweet by my veterinarian who advised all his patients to consider this new drug to help them enjoy the Fourth of July celebrations without hiding under the shed (or couch in my case).

“But how to convince my master to take me to the vet? That was a big problem. Luckily, however, I was due for a spaying and lo and behold, while at the vet’s office, I see this Sileo pamphlet in the waiting room.

“Of course, I was anxious about the spaying. I heard it was no big deal, but I was anxious anyway. In any case, I was able to get my master’s attention by grabbing the box of Slieo mysteriously left right there on the table next to the pamphlet in front of me and dumping it in his lap like I routinely do with dead mice when we are out for a walk in the park. He got the idea and I got Sileo. I was able to enjoy the Fourth without a fear in the world! And there were no side effects. Except, there seems to be something missing that I used to lick a lot. Can’t remember what it was. Oh well!”

“At heart,” reports FiercePharma, “the Sileo campaign is a disease awareness effort–and one from which human pharma companies might take a page. Like some human conditions, dogs’ noise problems may not warrant a full doctor visit, even though the problem affects quality of life. Also as with human ailments, there may be resistance to trying a drug treatment.” But that wasn’t the case for Chase!