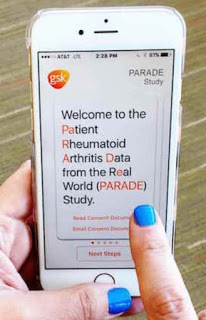 As reported in the trade media, GSK developed an iPhone app for use in “clinical research” (read “GSK Develops Rheumatoid Arthritis App for Clinical Trial Using Apple’s ResearchKit“). It is claimed that this “[marks] the first time a drugmaker has used the health system for the iPhone to conduct clinical research.”

ResearchKit is a set of tools for collecting participant consent, conducting surveys and assigning active tasks to participants that they can perform to help researchers achieve specific study goals.

Keep in mind, however, that this use of a ResearchKit iPhone app is not part of a clinical study involving an actual medicine. As reported by GSK here:

“We are the first in our industry to use Apple’s ResearchKit as part of our research, this time looking at the impact a patient’s disease has on their day-to-day life. We’re not testing a medicine right now. The medicines development process starts with learning from real patients by including their insights and health goals into our research. That’s exactly the information we hope to gather about rheumatoid arthritis, a debilitating disease which can impact patients’ lives at many levels.

“The PARADE study will use the iPhone app to conduct surveys and iPhone sensors to collect and track common symptoms of rheumatoid arthritis: joint pain, fatigue, and mood. It will also track activity and quality of life measures for 300 patients over a three-month period.”

This is not, however, the first use of Apple’s ResearchKit in the development and use of mobile apps for “clinical research.”

In March, 2015, it was reported that Sage Bionetworks, a non-profit research organization based in Seattle, enrolled more than 7,000 Parkinson’s patients in a single day for their Parkinson’s study. “As a point of reference, the largest clinical trial ever conducted for Parkinson’s had just 1,700 patients” (here). Stanford University designed a ResearchKit app to study cardiovascular disease. 11,000 study participants signed up in less than a day (“How to Get 11,000 Clinical Trial Participants Signed Up in One Day!“). The FDA-approved Dario mobile app lets patients test and monitor blood glucose levels and a finger-pricking smartphone attachment. The data could eventually be used in diabetes research (see “Incorporating Apple ResearchKit iPhone Apps Into Clinical Trials“).

One issue mentioned by a colleague of mine is that iPhone user demographics limits the use of ResearchKit apps to a specific demographic that may not be representative of the target population. Although more than two-thirds of Americans have an iPhone or Android smartphone, it is claimed that many lower income people may not have an expensive iPhone.

According to research reported by Forbes, “Both iPhone and Android people are affluent, educated, eager digital device consumers, and well-represented across the adult age spectrum up to 65 (read “What Kind Of Person Prefers An iPhone?” and see image below).

Also, I wonder how many people of low income are recruited into drug trials to begin with? Government studies have shown that lower-income patients are much less likely to participate in a clinical trial (see here, for example). A big factor is how much it costs patients to travel back and forth to clinical trial centers and has nothing to do wit their smartphone preference.

Hopefully, in the near future, Android will have its own version of ResearchKit and the smartphone demographics issue will be a moot point.