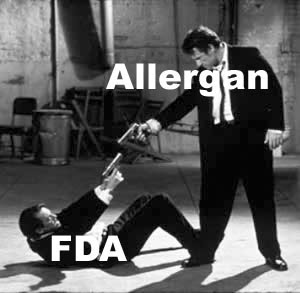 Allergan — the company that markets Botox legally for wrinkles and illegally for other things — agreed to pay $600 million in fines, including $375 million to the government as part of a Botox “misbranding” charge. Allergan admitted that its marketing of Botox from 2000 to 2005 led to intended use in treating headache, pain, muscle stiffness and juvenile cerebral palsy. Read the media stories and press releases here.

Why such a “reasonable” settlement for a drug company that, IMHO, is an unethical marketer and the the drug industry poster boy for off-label promotion? Allergan, for example, has refused to abide by PhRMA’s DTC Guidelines as well as PhRMA’s Guidelines for Interactions with Healthcare Professionals (see “Allergan Doesn’t Comply with PhRMA Guidelines, Wins Kudos Anyway“). Allergan has also been cited by the FDA for other violations such as a misleading Latisse Web site (see “FDA Reads My Blog: Declares Latisse Web Site Misleading“).

You must read a bit further down in the media articles about this to learn that Allergan “is required as part of the agreement to drop the lawsuit it filed against the FDA in October challenging a government rule that prohibits marketing drugs for unapproved uses.”

There’s a lot to ponder when reading that statement.

I ponder, for example, whether Allergan got off much easier because it agreed to drop its suit? Which was probably frivolous to begin with!

Allergan is currently seeking FDA approval of Botox for the treatment of migraine. In the above post I reviewed a clinical study that Allergan is doing to support its case. The drug was so ineffectual that the researchers admitted they “have searched for patient characteristics that may predict a favorable treatment response.” Of course, they ultimately were successful in winnowing down the migraine population that is responsive to treatment: ie, those people who suffer from “imploding” or “eye-popping” headaches but NOT “exploding” headaches.

This would all be a joke if Botox was not such a dangerous drug, which includes a black box warning on its label. But I won’t get into that — you can read what other people have to say about the dangers of Botox here.

P.S. As part of the agreement with the Justice Department, Allergan also will be required to publish information about its payments to doctors. I am not anticipating that Allergan’s physician payment information will be easy to analyze considering that much more ethical drug companies have failed to be transparent in this regard (see “Transparency Vs. Translucency in Reporting Physician Payments“).