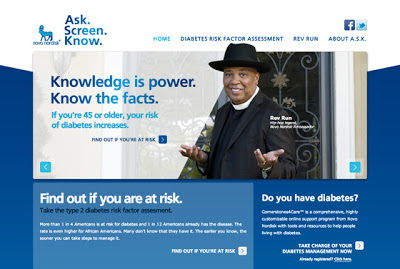 Novo Nordisk has gone through the PR wringer over its choice of Krispy Creme donut loving celebrity chef Paula Deen as its Victoza diabetes drug spokesperson. The latest Deen brouhaha is about her alleged racism and use of the “N” word (see “Should Novo Nordisk Dump Deen?“).

Given that, you might think Novo would be more conservative in its choice of future diabetes spokespeople. I just learned, however, that Novo recently signed hip-hop demigod Joseph “Rev Run” Simmons, the cofounder of Run-DMC, as a spokesperson for its “Ask. Screen. Know.” (ASK for short) type 2 diabetes screening initiative. If you do a bit of research, you will learn that back in 2008 — and maybe even up till he signed with Novo — Rev Run also teamed up with Kool-Aid, a sugary drink that is to type 2 diabetes what gasoline is to fire.

“At this stage in my life,” says Rev Run on the ASK Web site, “I had to ask myself the tough questions about diabetes. My dad had it, and, just like millions of Americans, I’m at risk for the disease. I am the man I am today because of my dad. He inspired my music, he inspired me to be a better father, and his fight with diabetes inspired me to take responsibility for my health. That’s why I’m working with Novo Nordisk on the Ask.Screen.Know. campaign. I’m asking people to be accountable for their health — ask the questions, listen up, and take action.”

One of the risk factors for type 2 diabetes listed in the ASK screening questionnaire is “Being overweight.” Need I mention that one suspected cause of obesity in children is sugary drinks such as Kool-Aid?

But Kool-Aid has purportedly changed the formulation of some of its drinks to be less sugary than soda and I’m sure the project Rev Run worked on — to help build several dozen playgrounds throughout the US — was very good PR for “fitness.” Still, how do you go from shilling for sugar water to shilling for diabetes awareness? Is it guilt?

Going from “sinner” to “believer” seems to be a pattern in how Novo chooses its celebrity spokespeople. Deen’s “sin” was promoting high-calorie, fatty, and sugary recipes. Now she says she includes more greens in her meals and eats in moderation. Rev Run may not have imbibed Kool-Aid, but his “sin” was working for the devil as far as diabetes is concerned. Now he is redeemed. Hallelujah!

The 10 Most Important, Awesome Pharma Marketing Highlights of 2010