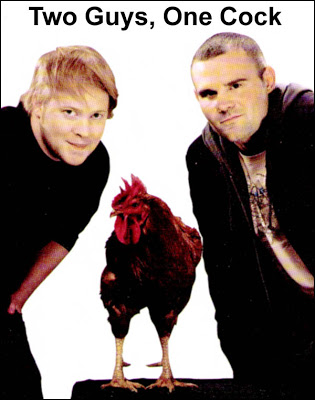 Forgive me, but I just could NOT pass this up!

In the March 2009 issue of Pharmaceutical Executive (PE) magazine, I found this image — sans my added text — showing the Saatchi & Saatchi Consumer Health + Wellness ad team that won a prestigious (I guess) 2009 “ad stars” award given them by the Pharm Exec staff.

PE identifies the two guys in the photo as (from left) Andrew Curtis, copywriter and Jay Marrotte, art director. The rooster, aka “cock,” was not identified, although PE did claim that the rooster was “specially trained to stay up at night.”

When the “Silence Your Rooster” ad first appeared on TV, I noted that most of the rooster vignettes used in the commercial were “politically incorrect”: men worried about sports, cars, and creative outlets whereas women worried about vacuum cleaners and hair dryers (see “Introducing the Politically Incorrect AmbienCR Rooster“). I suspected that there were more male than female masterminds responsible for these creative vignettes. Now that I see these two guys, my hunch has been verified!

P.S. Come on guys… Tell me that I am not the only one who thought “Two guys, one cock” when shown this photo!