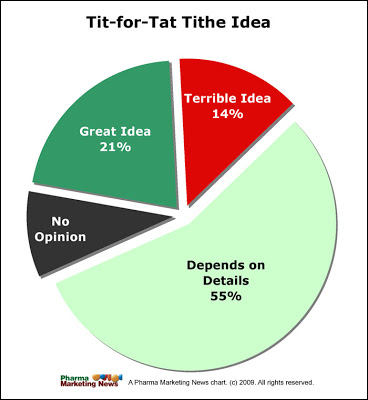 A few weeks ago, Fabio Gratton, Co-founder nd Chief Innovation Officer at Ignite Health and ePharma Pioneer Club™ member, was a guest on my Pharma Marketing Talk live streaming audio/chat show where he enlightened us about “How To Measure Social Network Communications Success” (see PMT Show #69).

During that interview, Fabio threw out a half-baked idea idea intended to help pharmaceutical companies effectively use social media networks by limiting the regulatory risks in exchange for setting aside 10% of their resources (online ad spend? total marketing? profits?) to promote general health and well being.

The regulatory risk most often cited by the drug company regualtory people is the uncertainty about investigating and reporting adverse events (AEs) their companies receive through comments on social media sites (see “Report from CBI’s eMarketing Forum: Taking on the AE Boogey Man“).

To get a discussion going on this, I asked respondents to the recent “How to Earn Back the Public’s Trust Survey” if they thought this was a good idea. I also asked them to submit comments. I will report the full results in the upcoming March 2009 issue of Pharma Marketing News. If you are not already a subscriber, you may want to subscribe now and get this issue delivered free as soon as it’s published.

Here’s a preview of what I learned. As the pie chart below demonstrates, the idea has some traction, although most people understandably wanted to learn more about the details.

None of the healthcare professionals HCPs) and consumers who responded to the survey thought this was a great idea. About 40% of HCPs thought it was a terrible idea. Keep in mind that there are not enough data to expand these results to the general population. Look upon this as an ad-hoc focus group.

Some comments, however, were of interest:

‘Without fear of penalty’ is the equivalence of how do we hear about adverse events without being held responsible for doing nothing. The bottom line is that ‘doing the right thing’ may result in lower profits and that is unpalatable. Regulatory agencies cut too much slack as it is.
——-
Patients are the center of this industry and we should want to open channels of communication wherever possible. Some of the benefits of this communication include better informed patients, patients more eager to enter therapy, more awareness around clinical trials (and other non-prescribed therapies), and patients who are pre-qualified seeking treatment options. This list can go on!
——-
Given the industry’s history of marketing and the consequences of DTC, CME, etc., I am skeptical. However, anything that improves patient management and promotes compliance and better outcomes is to be encouraged.
——-
What is meant by “focus more time on the general well-being of patients”? The industry spends hundreds of millions of dollars each year to discover new and more effective therapies, fund extensive disease state awareness efforts, donate charitable contributions to therapeutic co-pay foundations, support of patient advocacy programs and patient assistance programs, and so on. A lack of transparency and bad marketing practices by some has been the detriment to all… not just a lack of good will to patients. Additionally, regulatory agencies always regulate a few steps behind technology. General web advertising guidance came years after the advent of web advertising. “Good will” will not change regulatory opinion. A responsible approach to using new technology will. We sit back and wait for the guidance, when in reality we should be (in a sense) writing the guidance by demonstrating a responsible approach to educating our customers using new technology.
——-
Post marketing Pharmacosurvalience (sic) could be enhanced by the use of social media. It is in the industry’s best interest to open up the channels and see and hear what is really happening in the marketplace. It could prevent drug recalls by getting out in front of problems that were not encountered during the clinical trials prior to launch.

I have refrained from identifying who made these comments and whether or not they were pharma respondents. I will provide more comments and details in the upcoming Pharma Marketing News article.

Several people doubted that the FDA would ever publish guidance for pharmaceutical use of the Internet 1.0 let alone the 2.0, social networking version of the Internet. “Regulatory agencies always regulate a few steps behind technology,” said one survey respondent.

But the answer lies within the pharmaceutical industry itself. If it has an interest in getting clearer guidelines for social media marketing, it should petition the FDA to respond. The industry has brought pressure on the FDA before — ie, to publish guidelines on the distribution of off-label information to physicians.

The FDA could take a small step and define the industry’s responsibility to report adverse events (AEs) they come across on web sites — including social media sites — under their control. It’s not really a technology issue. That guidance could simply be something like “No self-reported AEs on social media sites need to be reported by pharma on Form 2253 under the following conditions…” Under a “tit-for-tat tithe” program, the conditions define a “safe harbor” available to pharma companies who commit to spending 10% of their marketing budgets to non-branded disease awareness programs approved by an independent 3rd party.

I’m interested in other ideas, if you have any.