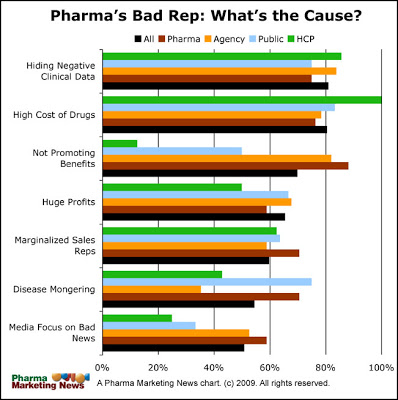 Thanks to everyone who responded to the “How to Earn Back the Public’s Trust Survey” that Pharma Marketing News hosted online between February 4 and March 14.

I’ve gotten some great insights from respondents and will report the full results in the upcoming March 2009 issue in a few days. If you are not already a subscriber, you may want to subscribe now and get this issue delivered free as soon as it’s published.

Meanwhile, I’ll whet your appetite by presenting a few highlights from the survey here. Specifically, I’ll focus on why respondents believe the industry’s reputation is so bad.

This all started when I quoted Ray Kerins, Pfizer’s global PR chief, who said “How in the hell do we have such a bad reputation?“

His answer: The media is the main culprit because it reports mostly bad news about the industry and not the good that it does. His solution: Engage the media more pro-actively and tell them the good the industry does. I’ve heard a lot of pharma executives say the same thing. In fact, the common belief among pharma PR people is that it takes 6 positive stories to counteract 1 negative story.

The “Media as culprit” argument seems to be more popular among pharma respondents and their agency allies than among healthcare professionals (HCPs) and the general public. Pharma respondents also believe the the industry has not done enough to educate the public about the benefits it provides.

However, the two most-often cited reasons among all respondents were the high cost of drugs and the lack of transparency when it comes to reporting negative clinical data.

I was a bit surprised that “profits” were not cited more often as the cause of the industry’s bad reputation.

All in all, the survey indicates a bit of a disconnect between the industry and its customers — HCPs and patients. I suppose this is to be expected.

The next question is, how can the industry improve it’s reputation and earn back the trust of its customers? The survey included several suggestions, including the following:

Unfortunately, the survey is now closed, but if you have any suggestions that you wish to contribute and to be cited in the article, please post them as comments to this post. You can remain anonymous or identify yourself — your choice (I wouldn’t want anyone to be fired because they made an honest comment to a blog!).

Are you happy to see me, or is that just your...