I have written about the Rozerem advertising debacle repeatedly, pointing out how inane it is and worse, how it has been ineffectual in helping the brand gain market share.

This point of view is not radical. It’s shared by many experts and journalists who write on the subject, although they have to report that the emperor has a wonderful suit of clothes on.

Take, for example, the short article “For Rozerem DTC Campaign, it’s steady as she goes” in the February, 2007 issue of MM&M, an industry publication I greatly admire.

“CONSUMERS WILL see more of Honest Abe this year, despite lackluster sales of Rozerem,” says MM&M. The article goes on to quote Paul Broidy, director of neuroscience marketing for Takeda Pharmaceutical NA: “If there’s a theme,it’s steady growth and keeping the strategy that we have.”

IMHO, this “circle the wagons”, “stay the course” approach may be politically correct and is probably the only course of action available to someone who was responsible for the strategy in the first place (I’m talking about Paul Broidy, not someone else).

Maybe it’s time for a change in leaders?

And trade publications and journalists continue to drink their Kool Aid! MM&M isn’t the only one I’m thinking of. See “Rozerem Ads Innovatively Ineffectual” for another example of jingo-pharma journalism. 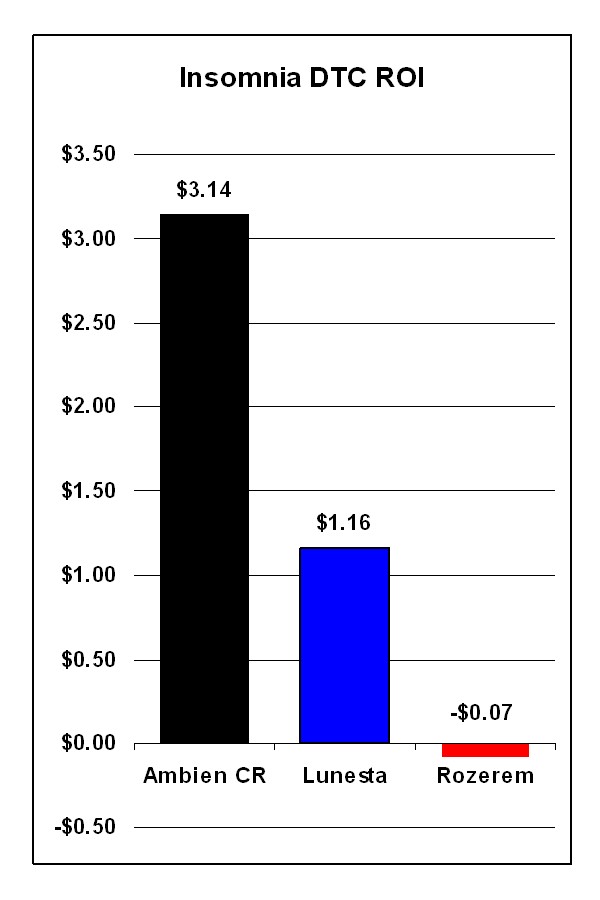 Each time such a Rozerem story appears a new nail is added to the coffin if only people were to look at the numbers instead of the rhetoric. In the MM&M article you can find total retail sales numbers and DTC media spend numbers for the major insomnia brands. Using these numbers, I came up with the ROI plot shown on the left. [If you need to know how I calculated this from the published numbers, submit a comment to this blog.]

Aside from the Rozerem DTC campaign being in negative territory — something I noticed several months ago — it has not even been able to get Rozerem sales above that of Sonata for which “no [DTC] spend was detected! For the July to November, 2006 period Rozerem retails sales were $37.15 million whereas the Sonata sales during the same period was $38.91 million!

I’m not yet ready to say that all DTC is ineffectual — after all, both the Lunesta and Ambien CR campaigns seem to be able to muster positive ROIs. But don’t you think your strategy needs reworking if your campaign is in negative territory?

Let’s finally admit that the emperor has no clothes!