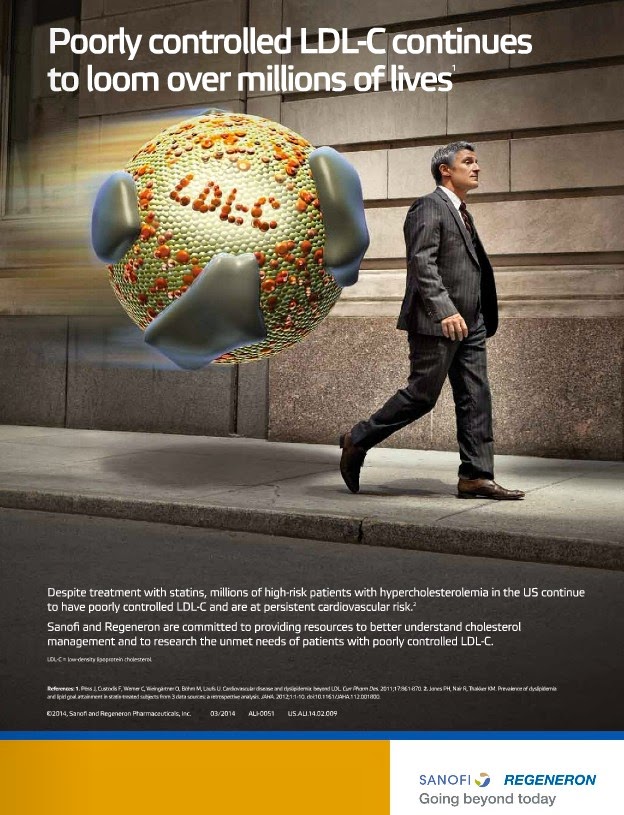 Drug print ads aimed at patients are usually upbeat showing the benefits of the pill. Print ads intended for physicians on the other hand are often dark and downright scary. I came across this medical journal print ad about “poorly controlled LDL-C” yesterday:

What’s up with this?

Obviously, this male caucasian businessman is going to get splattered all over what appears to be Wall Street by that scary LDL-C particle zooming straight for him. Look out dude! Too late. Splat!

This ad does not mention a drug name because Sanofi/Regeneron do not yet have marketing approval for PraluentTM (alirocumab), which is an investigational monoclonal antibody targeting “PCSK9 (proprotein convertase subtilisin/kexin type 9) that is intended for the treatment of patients with hypercholesterolemia.” But it was just announced that the FDA has accepted Praluent for priority review (see press release). The ad is just the opening salvo for marketing this drug, which may be on the market as early as this summer.

BTW, the press release cited above DOES mention the drug trade name and the indication, but does not include any important safety information (ISI) that otherwise would be required by the FDA. Interesting.

UPDATE (26-MAR-2015): Regarding ISI in press releases, I received this comment via email from an anonymous “Regulatory Affairs Sheldon Leonard”:

I’m taking the liberty of responding privately via email to offer my opinion as to why Sanofi’s press release didn’t include the fair balance bells & whistles. [Disclosure: I don’t work for them, and I’m not a lawyer!]

There are two main reasons: first, the company hasn’t developed a F/B paragraph (or as we sometimes call it in industry, the “ISI” or important safety information) since the BLA was just filed and the label isn’t finalized. They’ll go through that exercise as they’re closer to approval, and in any case will nail down the ISI upon approval. Don’t be surprised to see some flavor of it in future press releases. But not to appease the FDA.

Which brings me to the second (and probably more important) reason why the ISI isn’t in the press release: it’s directed at investors. Ostensibly the PR isn’t intended to be promotional (or in this case, pre-promotional). Companies will say their communications to investors are monitored by the SEC, thus it’s outside of FDA’s jurisdiction.

‘course, that hasn’t stopped Tom Abrams from sending enforcement letters to companies over press releases when his group at FDA feels they’ve crossed a line. (Check out this 2002 letter to Burzynki Research Institute; this 1997 letter to Wyeth-Ayerst; and this 1998 letter to Celgene.)

I Give Lilly’s Glucagon Injection Branded Mobile App an A+ But...