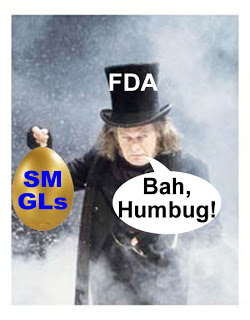 FDA’s DDMAC is playing Scrooge to the drug industry’s Tiny Tim this Christmas season and — to mix metaphors — won’t be laying the golden goose egg everyone was expecting in 2010. The egg of which I am speaking, of course, is guidance for drug promotion via the Internet and social media.

According to a post over at EyeOnFDA, DDMAC issued this statement:

The Division of Drug Marketing, Advertising, and Communications (DDMAC) has been researching draft guidance topics on the following issues related to Internet/social media promotion of FDA-regulated medical products:

Our goal is to issue one draft guidance that addresses at least one of these topics during the first quarter of 2011, but we cannot comment any further at this point as to exactly when any draft guidance will issue or any specific order in which the topics will be addressed. The public will be notified officially when any guidance is issued via Federal Register announcements.

I am not sure where this statement was made or to whom exactly, but I’ll take it at face value.

This delay does not bode well for all of us expecting action from the FDA. With the new, Republican-controlled Congress coming into session next year, “Lame Duck” (or Cooked Goose) FDA officials are likely to be summoned before Senate and House committees to testify and to be grilled by Republicans. FDA may have to defend a lot of its recent regulatory actions. Obviously, Republicans favor less regulation and not more regulation. This may set the atmosphere within the FDA to be less vigilant regarding the regulation of drug advertising in general and Internet advertising in particular.

Also, political battles are likely to rage during the next Congress regarding recent online privacy initiatives by the FTC and the White House. The FDA may be caught up in these battles and be forced to be more cautious about issuing Internet guidelines. The announced delay may even be the first sign of caution. I note that the Center for Digital Democracy, for example, said FDA was incapable of policing privacy issues related to online health marketing (see “New Media Privacy Issues & Online Health Marketing“).