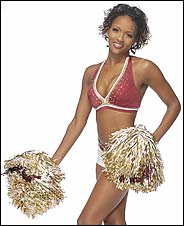 “Known for their athleticism, postage-stamp skirts and persuasive enthusiasm, cheerleaders have many qualities the drug industry looks for in its sales force,” according to an article in today’s New York Times (see “Gimme an Rx! Cheerleaders Pep Up Drug Sales“).

What about woman physicians? Are pharmaceutical companies overlooking their sexual needs? Or are young male Chippendale performers also being sought after as sales reps? I guess so, if the following observation is true:

“There’s a saying that you’ll never meet an ugly drug rep,” said Dr. Thomas Carli of the University of Michigan. He led efforts to limit access to the representatives who once trolled hospital hallways. But Dr. Carli, who notes that even male drug representatives are athletic and handsome, predicts that the drug industry, whose image has suffered from safety problems and aggressive marketing tactics, will soon come to realize that “the days of this sexual marketing are really quite limited.” [NY Times]

OK, so drug companies like to hire good-looking, out-going, young people as sales reps. This is not news. However, some critics — like Dr. Thomas Carli of the University of Michigan — claim that seduction is a deliberate industry strategy. I doubt that this is true. More troubling, however, is the dumbing down trend among pharma sales reps. Could increased recruiting of cheerleaders be a factor?

Dumbing Down
In an article in this month’s Pharma Marketing News, a methodology for evaluating pharmaceutical sales rep effectiveness is reviewed (“Sales Rep Assessment: Shoot the Messenger, the Message, or Both?“). The methodology centers on using trained physicians to score sales reps on a number of parameters such as building rapport and product knowledge. According to Michael Kessler, MD, VP of Metamorph Doctors, LLC., a company doing sales rep assessments, “representatives, in general, are scoring lower in their ability to communicate clinical information in a way that is palatable and understandable to the doctor.”

According to T. Lynn Williamson, a cheerleading adviser at the University of Kentucky, pharma sales rep recruiters “don’t ask what the major is.” Proven cheerleading skills suffice. “Exaggerated motions, exaggerated smiles, exaggerated enthusiasm – they learn those things, and they can get people to do what they want.” [NY Times]

I will close with this: Pharma companies continue to shoot themselves in the foot and this is just another example of that syndrome. Perhaps they can’t avoid it. Sex sells and that is the name of the game. But, when Michael Moore comes out with his new documentary exposing this and other sales rep practices, the shit will really hit the fan.

Avandia Hearing Begins with Slurs Against NEJM and Majority Members