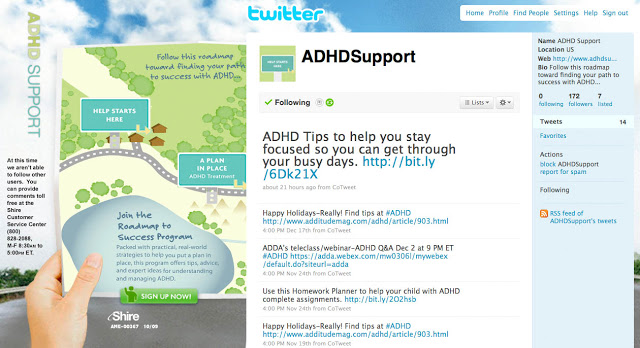 In what has to be a truly innovative use of Twitter, Shire Pharmaceuticals launched a phone-assisted ADHD Support Twitter account (@adhdsupport). Instead of following other Twitter users and building up a community where followers can “direct message” the account, @adhdsupport suggests that people call the Shire Customer Service Center if they want to provide comments. The reason given: “At this time we aren’t able to follow other users” (see screen shot below).

I decided to call the 1-800 number listed and ask why @ADHDSupport is “not able” to follow other Twitter uses “at this time” and when it will be able to do so. LISTEN TO THE PHONE CALL.

Phone-assisted social networking may not work for all pharmaceutical products, but it is well-suited for ADHD products because — according to this Shire “ADHD: Not Just a Child’s Disorder” fact sheet — ADHD sufferers:

[I rephrased these as statements rather than questions as originally posed in Shire’s fact sheet.]

Well, I’ll wait for Shire to call me back and then see if I get more information.