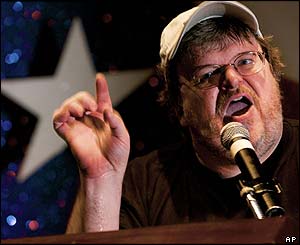 Last February I wrote about Michael Moore’s new film “Sicko” and suggested that it will be about Moore than the pharmaceutical industry (see “Michael Moore Seeks Sickos“).

In July, Moore sent out an email notice that more or less confirmed this:

“But like my other movies, what we start with (General Motors, guns, 9/11) is not always what we end with. Along the way, we discover new roads to go down, roads that often surprise us and lead us to new ideas — and challenge us to reconsider the ones we began with. That, I can say with certainty, is happening now as we shoot “Sicko.” I don’t think the country needs a movie that tells you that HMOs and the pharmaceutical companies suck. Everybody knows that. I’d like to show you some things you don’t know.”

Also, Peter Rost — “Pharma’s Black Knight” — was once asked to be in the movie, but suddenly Peter has been left hanging by Moore, which leads him to suspect that pharmacos will not be the villains of the movie after all. Rost, however, continues to tilt at the wind mill (see Rost’s post: “Ideas for Michael Moore’s Film Sicko“).

Moore’s technique of cornering hapless executives into making incriminating statements during an interview probably would not work with the pharmaceutical industry. Not that there are no hapless pharmaceutical executives, but the industry circled its wagons long ago and warned its employees not to talk to “overweight middle-aged tall men with an unkempt appearance wearing a baseball hat.”

But there are plenty of disgruntled former employees like Rost and sales reps willing and able to talk to Moore. Plus, many doctors would give him free reign for interviews about drug company abuses. Patients too would be available.

Perhaps the industry employed another Moore-busting technique: pay off the patients who tell Moore their horror stories. According to a post on the Cinematical Blog:

The problem, though, is that all the health care companies know exactly who Moore is, so the moment he shows up to document the struggles of a family dealing with an outrageous situation, “they get free health care.” According to Moore, “There has been a 100% success rate of the people we’re filming of getting whatever they need from the HMOs, pharmaceutical companies, whatever.” Well, that’s progress. Now all we have to do to fix things is have Moore travel to all the families with complaints, and the health care issue will be solved, right?

Perhaps pharmacos can breathe a sigh of relief. At worst, they will play a supporting role in Moore’s film, not a starring role.

But then again, this may be a dastardly plan by Moore to cause the industry to drop its guard.